Glanbia sent massive loans between Ireland, US and staff-less subsidiaries 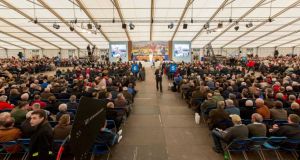 Glanbia shareholders at a 2012 meeting in Gowran Park, Co Kilkenny. The food group that has its roots in the co-operative movement set up its first Luxembourg subsidiary in 1997, the same year the group was formed from the merger of Avonmore plc and Waterford Foods plc.

Glanbia, the major Irish food group that has its roots in the co-operative movement, set up its first Luxembourg subsidiary in 1997, the same year the group was formed from the merger of Avonmore plc and Waterford Foods, plc.

Massive loans going back and forth between Ireland, Luxembourg and often the United States have had the effect of reducing the group’s tax bill in this jurisdiction and the United States by creating interest costs that can be deducted against profits.

Advanced tax agreements (ATAs) negotiated between PwC in Luxembourg and the tax authorities there, which have been seen by The Irish Times, outline how Luxembourg was used to finance Glanbia group investments while, at the same time, reducing the group’s overall tax bill including its Irish corporation tax bill.

In return, Luxembourg received corporation tax income on a tiny margin of the transactions being conducted through the tiny EU member state.

The documents record how since 1997 a Glanbia subsidiary in Luxembourg, Glanbia Luxembourg SA, has been borrowing money from Irish Glanbia companies, sometimes at a rate of 0.0625 per cent, and then lending the money on to Glanbia Foods Inc, in the United States, where the food group has made substantial investments over the years.

The Luxembourg company deals exclusively in US dollars though some of its loans go to Glanbia Financial Services, an Irish company based in Glanbia House, Kilkenny.

In 2007, Glanbia set up a second Luxembourg company, Glanbia Luxinvest SA, which deals exclusively in euro.

In July 2009 PwC advised Marius Kohl of the Luxembourg tax authorities, how Luxinvest was going to borrow €35 million, interest-free, from an Irish Glanbia company based in Kilkenny, and forward the money, on the same day, to Glanbia Financial Services, also in Kilkenny. The loan from Luxembourg to Ireland would bear interest.

The Luxembourg company would be allowed to assign a “deemed” or supposed rate of interest on the interest free loan it would receive from Ireland, the correspondence said. It would charge interest on the loan it gave to the second Irish company.

Because of the deemed interest, the Luxembourg company would make a very small profit margin, on which it would pay tax. The method for calculating this was set out in the letter.

Accounts in the companies register in Luxembourg for the two Glanbia subsidiaries, show that the amounts of money going through them have grown hugely.

The structure meant that by routing its own money through the Luxembourg financing structure, Glanbia could reduce its tax bill in Ireland and the US, because the interest payments could be charged against tax.

However, no corresponding additional tax charge was being recorded in Luxembourg, because Luxembourg allows the companies based there charge a deemed interest rate on their interest-free borrowings, thereby reducing their taxable profits.

By 2012 Glanbia Luxinvest had loans totalling €100 million out to other group companies bearing interest rates of between 1.5 per cent and 2.75 per cent above the interbank rate (Libor). At the same time it had borrowings of €93.7 million, at zero interest, from an Irish group company.

Despite the huge amounts involved, neither Glanbia subsidiary in Luxembourg had any staff in 2012, and their registered address was at the Luxembourg offices of the global financial and administrative services provider, Alter Domus. Their accounts were audited by PwC.

No staff Glanbia has a third subsidiary in Luxembourg, Glanbia Luxfin, which uses the same address as the other two Luxembourg companies and had no staff in 2012.

At the end of that year it had interest-bearing loans totalling $84.5 million out to two fellow Glanbia companies, and interest-free borrowings of $80 million from Avonmore Skim Milk Products.

Glanbia taxation director, Brendan O’Leary, is a director of the Glanbia subsidiaries in Luxembourg, along with two Luxembourg resident directors who use the Alter Domus address.

Notes to the accounts of the three Luxembourg companies say their results are included in the consolidated accounts of Glanbia Plc.

The latest annual report for Glanbia does not mention its Luxembourg operations.

A spokeswoman for the company pointed out that the Luxembourg companies use the Glanbia name and are clearly identifiable as group companies.

Sports nutrition a key area for food giant
Eoin Burke-Kennedy adds: Glanbia was formed out of the merger of Avonmore Foods and Waterford Foods in the late 1990s. The group, which has its HQ in Kilkenny, is best known here for brands like Avonmore and Kilmeaden.

However, the lion’s share of its business is taken up with its sports nutritional products and its cheese operations in North America.

As of 2013, the Dublin and London-listed company employed 5,200 staff in 32 countries and had an annual turnover of €3.2 billion. Its chief executive Siobhán Talbot received a total pay package last year of €1.03 million.

The nutritionals and ingredients – the two largest segments – represent about 76 per cent of total turnover, and are described by the company as “the key drivers of growth”.

Due to its large cheese manufacturing business, it has become a world leader in whey protein, a byproduct of the cheese-making process, which is used extensively in the fast-growing sports nutritional market.

Its ingredients division is heavily geared towards its US Cheese operation, a leading producer of American-style cheese, as well its Ingredient Technologies operation.

On the dairy side, its core brands are Avonmore, the second biggest selling grocery brand in Ireland, and Kilmeaden cheese.

It also distributes on behalf of a number of third party brands including Yoplait.

It has four principal international joint ventures – Southwest Cheese in the USA, Glanbia Cheese in UK, Glanbia Ingredients Ireland and Nutricima in Nigeria.