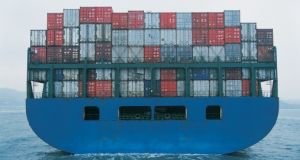 Exports to Britain fell by 12 per cent in July compared with the same month last year, the latest trade statistics from the Central Statistics Office (CSO) show.

The figures were published less than 24 hours after the UK Internal Market Bill passed its second reading in the House of Commons, which if passed into law would give British ministers the power to breach aspects of the withdrawal agreement, giving rise to increased fears of a no-deal Brexit.

A no-deal Brexit would leave Irish exporters who rely on Britain badly exposed as trade would revert to World Trade Organisation (WTO) rules, which would involve customs formalities as well as tariffs on goods.

Irish exporters have been moving to reduce their reliance on the UK since it voted to leave the EU.

The CSO figures show exports to Britain fell €133 million, or 12 per cent, to €988 million compared with July 2019, and accounted for 7 per cent of total exports.

The value of goods exports to Britain in the first seven months of the year was €6.8 billion, which amounted to a decrease of €1.1 billion, or 14 per cent, compared with January to July of 2019.

Imports from Britain in July 2020 increased by 2 per cent to €1.5 billion compared with July 2019. They accounted for 18 per cent of the value of total imports in July.

The value of goods imports from Britain for January to July was €10.2 billion, which was a decrease of €383 million, or 4 per cent, compared with the first seven months of 2019.

Overall, seasonally adjusted goods exports increased by €78 million (up 1 per cent) to €13 billion in July compared with June.

Total EU exports in July decreased by €64 million (down 1 per cent) compared with July 2019. As the UK had exited the EU on January 31st, this data compares EU trade excluding the UK for both periods for comparative purposes.

The US was the main non-EU destination accounting for €4.4 billion or 33 per cent of total exports.

The EU accounted for €3 billion (36 per cent) of total goods imports, which was an increase of 10 per cent compared with July 2019.

The State’s main source of exports were medical and pharmaceutical products, which increased by 14 per cent to €4.9 billion, accounting for 37 per cent of the total.

Exports of organic chemicals increased by 6 per cent to €2.7 billion compared with July 2019.

1 Three Ireland switches on 5G network around the country
2 Harry Crosbie puts family haulage business into liquidation after port dispute
3 Am I paying too much for my buy-to-let mortgage?
4 New car prices could rise by up to €10,000 if taxes increase in budget
5 High Court grants permission to pay €2.7m tax bill
6 Pilita Clark: The looming legal minefield of working from home
7 Me & My Money: ‘Money can’t buy you happiness but it can make life a lot easier’
8 Argento founder Peter Boyle is streets ahead of the past
9 Mortgage breaks will not be extended beyond this week
10 Coronavirus threatens Europe’s pension industry
Real news has value SUBSCRIBE