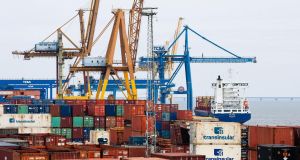 Portugal's economy shrank for a ninth quarter in the three months through December as consumer spending fell and exports dropped with the euro-area recession.

Gross domestic product declined 1.8 per cent from the third quarter, when it fell 0.9 per cent, the Lisbon-based National Statistics Institute said in an e-mailed statement. That matches a preliminary report on February 14.

Fourth-quarter GDP dropped 3.8 per cent from a year earlier. It was the biggest annual and quarterly contraction since the first quarter of 2009.

Prime minister Pedro Passos Coelho is battling rising joblessness and lower demand from Eu ropean trading partners as he raises taxes to meet the terms of a ¤78 billion aid plan from the Europe an Union and the International Monetary Fund.

Portugal may get an additional year to narrow its budget deficit as the country's economic outlook worsens, minister for finance Vitor Gaspar said on February 20.

Exports dropped 2.1 per cent in the third quarter from the second, today's report showed. Imports slipped 1.4 per cent in that period and household spending tumbled 2.3 per cent. Government spending declined 1.1 per cent.

The Bank of Portugal predicted on January 15 that the economy will contract 1.9 per cent in 2013, more than previously forecast, as export growth slows.

Exports will rise 2 per cent this year, slowing from estimated growth of 4.1 percent in 2012, the central bank said.

The Portuguese economy may contract 1.9 per cent this year before expanding 0.8 per cent in 2014, the European Commission forecast on February 22. Economic growth has averaged less than 1 per cent a year for the past decade, placing Portugal among Europe's weakest performers.

The GDP forecast for 2013 may be revised downward by about 1 percentage point during a review of the aid program that began on February 25, Mr Gaspar has said. The government's last estimate was for GDP to drop 1 per cent in 2013 before expanding 0.8 per cent in 2014.

GDP dropped 3.2 per cent last year, according to the statistics institute. Mr Gaspar plans to cut spending by about ¤4 billion in the two years through 2014, when he forecasts debt will peak at 122.3 per cent of GDP after reaching 122.2 percent in 2013.