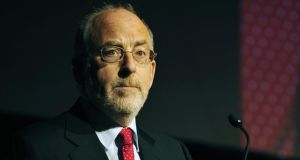 Personal debt – and mortgage debt in particular – is the inconvenient truth spoiling the Irish recovery story. It reared its ugly head a few weeks back when the bank chief executives gave an account of their progress in dealing with over-borrowed homeowners to the Oireachtas finance committee. It was an occasion that overlapped with the opening of the new insolvency services and generated a good deal of noise, as it should, about how little progress is being made.

But the fuss faded away pretty quickly, drowned out by the news that we are out of recession again. The governor of the Central Bank pulled it back to centre stage when he appeared before the same committee last week – accusing the banks of wishful thinking – but nobody seems to care.

It’s easy to understand how a population exhausted by five years of austerity can put its collective head in the sand and prefers to believe the Government when it tells them we are on the cusp of recovery, even though they see little improvement in their personal circumstances.

Crippled by debt
What is less easy to understand is why the supposedly cool heads in the bond market are not asking the simple question: how can there be sustained recovery when so many people are unable to play their part by spending because they are crippled by debt?

When you hear – as we did last week – that more than a million people think they have less than €50 a month left after paying bills, you can’t deny there is a problem. Whether they actually have only €50 to spend is neither here nor there. If that many people in a State our size feel broke, you must run the risk of a Japanese-style lost decade where people just stop spending, pay off debt and the economy flatlines.

One presumes bond traders read the papers so a more sophisticated question is: why do they remain invested when the Government does not seem to have grasped the nettle on personal debt?

Are they being very smart and plan to be gone from Irish bonds by the time the penny drops that this economy is far from healed? Or are they very stupid and risk being caught with their pants down once again?

The answer is a mixture of both and many shades in between: that is what makes a market. The net point is that we should not take the current positive sentiment towards Ireland as confirmation that the economy is fixed or that the Government’s approach to personal debt is correct. That said, the Government is probably doing all it reasonably can within the multiple constraints on it, including the national finances.

But it’s looking more and more like the State-backed banks – AIB, Bank of Ireland and Permanent TSB – have not been given enough money to be able to deal with bad personal debt quickly and ensure their own survival. If they could, they would have done so because it would be the quickest route back to sustained profitability.

You only have to look at what Bank of Scotland, Ulster Bank and National Irish/Danske have done. Their respective parents and governments had deeper pockets and thus could confront the fact that much of the money lent to Irish consumers is gone and that they need to write it off and move on. Local management might not have wanted to believe it because their jobs were on the line but the number crunchers in Edinburgh and Copenhagen were a little more clear-eyed and their provisioning far exceeds that at the Irish-owned banks.

Bailout found wanting
The adequacy of the Irish bank bailout is now being tested and found wanting to the detriment of the recovery.

The level of unsustainable personal debt – including mortgages – is so large that the banks’ ability to absorb the inevitable losses has become a key determinant of the speed of any recovery. And as Central Bank governor Honohan noted last week, they are not – or perhaps cannot – move quickly enough: one suspects the corollary of that is that they cannot write off debt deeply enough.

As each day drags by the case for a further recapitalisation of the banks gets stronger. The problem is that we don’t have the money and probably can’t get it while also retaining the confidence of the bond markets. As a result we risk a prolonged and anaemic recovery – unless the bond markets wake up to the full extent of the problem and we are forced to take a second bailout to fix the banks again! Hard to know which would be worse.