China targets up to 7% growth, unemployment to rise 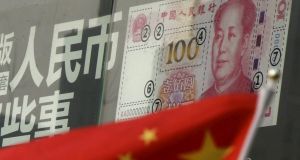 China has set its economic growth projection range at 6.5 to 7 per cent this year, but efforts to curb overcapacity is expected to raise unemployment in some provinces, an official from the country’s top economic planner said on Wednesday.

Xu Shaoshi, chairman of the National Development and Reform Commission (NDRC), told a news briefing that downward pressure on the world’s second-largest economy would remain in 2016.

China’s investments were now focused on fixing weak points and structural adjustments, including infrastructure in the central and western regions, education and healthcare sectors, he said.

Beijing’s attempts to curb overcapacity will increase unemployment in provinces with high output of steel and coal, Mr Xu said, adding that job losses in provinces such as Shanxi, Heilongjiang and Hebei will rise.

Keeping unemployment low is a top policy priority for China’s stability-obsessed government, a task it has admitted is becoming more difficult as growth sags.

Local governments started trying to tackle overcapacity in 2013, he said, and are already aware of problems arising from unemployment, a build-up of company debt and bank loans.

“Now the problems are worse than they were two years ago but the government has the ability to cope,” Mr Xu said.

He did not elaborate on what kinds of policies the central government and local governments were using to deal with rising unemployment as a result of attempts to curb overcapacity.

The government was more likely to intervene and provide unemployment support for people from state-owned enterprises, rather than for private businesses, he said.

China’s plan to cut its steel production capacity by 100-150 million tonnes will lead to the loss of up to 400,000 jobs, the official Xinhua news agency reported last month.