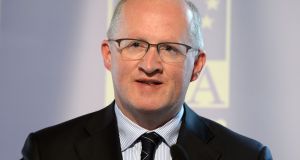 Central Bank governor Philip Lane said the Government needed to work on alternative ways for measuring the economy because of the recent anomalies in gross domestic product. Photograph: Eric Luke

Central Bank governor Philip Lane has stressed the need for prudence in the upcoming budget, warning the Government not to base spending plans around temporary spikes in tax revenue.

In a pre-budget letter to Minister for Finance Michael Noonan, Prof Lane said the Government would be wise to assume that a significant portion of the current surge in corporation tax revenue may be temporary in nature.

The windfall has been linked to multinationals purchasing intellectual property assets from rival subsidiaries on foot of the global clampdown on tax avoidance.

The restructuring of balance sheets by a handful of big corporates in the tech, pharma and aircraft leasing sectors was responsible for an extraordinary jump in Ireland’s headline rate of economic growth last year, which was recently revised up to 26 per cent.

In his letter, Prof Lane acknowledged inherent volatility in the Irish economy did not make it easy to calculate a sustainable path for tax revenues.

He said the Government needed to work on alternative ways for measuring the economy because of the recent anomalies in gross domestic product (GDP).

“The well-known interpretation issues with measured GDP for Ireland makes it obvious that standard fiscal indicators (expressed as ratios of GDP) need to be supplanted by locally-developed targets that are robust to statistical issues,” he said.

The Central Statistics Office and the Central Bank have established a working group to examine how to provide more accurate information about Ireland’s economic performance.

Prof Lane noted that while the European framework prescribed a target ceiling for public debt, which is 60 per cent of GDP, there were also compelling reasons to develop a national target.

Ireland’s revised growth rate for last year saw the State’s national debt fall to below 80 per cent of GDP, down from 94 per cent before the revision and a 120 per cent in 2012.

While recovery has fostered a strengthening of the banking system, Prof Lane said recent stress tests confirmed the financial system remained vulnerable in the event of a downturn or a deterioration in the international financial environment.

“Given this assessment, it is clear that a prudent fiscal strategy remains essential, given the feedback loops between fiscal stability, financial stability and macroeconomic stability,” he said.

The governor also cautioned that while the low interest rate environment may reduce debt servicing costs, interest rates will eventually normalise, “even if the speed of reversion is quite uncertain”.

Therefore budgetary decisions should be embedded in a long-term strategy that recognises the implications of an ageing population for expenditure on pensions and healthcare.

Prof Lane said even allowing for the negative impact of Brexit, the Central Bank expects the economy to grow by 4.9 per cent and 3.6 per cent in 2016 and 2017 respectively, with unemployment falling to 7.2 per cent next year.

Despite the strength of these metrics, he warned the risks to Ireland’s recovery were still “tilted to the downside”.

“Ireland is especially exposed due to the legacy of high public and private debt levels, the sensitivity of small, highly-open economies to international shocks and Brexit-related vulnerabilities,” he said.