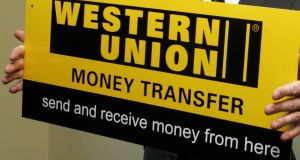 The Central Bank has fined Western Union Payment Services Ireland €1.75m because of failures in anti money laundering practices which could have left the firm’s payment services open to being used for money laundering and/or terrorist financing.

The Central Bank’s director of enforcement, Derville Rowland said that the level of the fine imposed reflects a significant increase on penalties previously imposed for similar failures, and is due to the sector in which the firm operates and its reliance on third party agents and outsourced service providers.

“The firm is a global market leader in the provision of payment services. I am therefore concerned that this firm failed to have in place sufficiently robust systems and procedures to train agents, to monitor and identify suspicious activity in respect of smaller transactions, and to maintain appropriate records,” she said.

Western Union provides money transfer services through a large network of agents. The agents accept money on behalf of Western Union, which transfers it as requested for a fee.

Problems were first noticed during an inspectionby the Central Bank, and following a further investigation, the regulator found that Western Union failed to adopt sufficiently robust policies and procedures in relation to Anti Money Laundering (AML)/CFT outsourcing; customer due diligence record retention; induction and training of retail agents; and systems for monitoring and identifying suspicious activity.

The company’s IT systems did not monitor transactions that were under $500 or the equivalent amount in euro, leaving it to a group function in Denver, even though the splitting of payments into many separate smaller payments is a common method used to launder money.

Training was another area where shortcomings were identified, as Wester Union did not have adequate controls to ensure that appropraite AML training was provided to all its agents’ employees.

Problems also arose in the manner that Western Union outsourced key AML/CFT compliance functions to another group entity located in Lithuania by way of a “chain” outsourcing arrangement.

The Central Bank said that the matter is now closed.

1 Whiskey a go go: sales top $1bn in US
2 ‘Life in Vilnius reminds me of Ireland in the 1990s’
3 Dating apps move past their shaky start
4 The ‘gangster’ superior, the Irish priest and the wealthy widow
5 Boeing identifies new software flaw in grounded 737 Max
6 The Irish economy is thriving but if you’re not feeling it – here’s why
7 Glencore puts Chad oil business up for sale five years after purchasing it
8 Luck, timing and a few master strokes key to Comer brothers’ success
9 Real price of cheap credit? Unaffordable homes
10 Dublin housebuilder records €11m gain after striking deal with bankers
Real news has value SUBSCRIBE