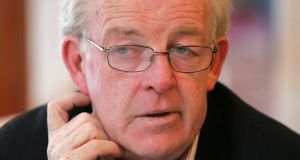 “To a degree Ireland has managed to persuade people to locate activities in the IFSC here in Dublin, which are satellite activities for things that are going on in London”

A British exit from the European Union could irrevocably damage Ireland’s agricultural trade with Britain and cause an outflow of business from Dublin’s financial services centre, economist Colm McCarthy has warned.

On the basis of current political trends and the likelihood of some deal being struck in advance of a vote, Mr McCarthy described the prospect of Britain leaving the EU as “remote but not entirely unlikely”.

Whatever the case, he said the Government should be involved in any pre-referendum negotiations Britain has with Brussels, given the big consequences for Ireland.

The University College Dublin academic was addressing the joint Oireachtas committee on EU affairs on the possible ramifications for Ireland of the so-called “Brexit” scenario.

In the event of a UK exit, Mr McCarthy said, Britain would probably try to negotiate a free-trade area deal with the EU similar to what Switzerland and Norway have.

Ireland had “a special interest in the details of whatever free trading arrangements the UK might negotiate”, he said, given the level of integration between the two economies and the fact that Britain is Ireland’s biggest trading partner.

Free trade in agricultural products could be difficult to maintain with Britain as it has never been a strong supporter of the EU’s Common Agricultural Policy (CAP).

“If Britain were to leave the EU they might regard the ability to depart from CAP as a bonus, and they might seek to negotiate arrangements for agricultural trade, which might not suit us at all.”

Another possible side-effect of Brexit would be the possible change to London’s status as Europe’s financial hub.

This could have knock-on effects for the International Financial Services Centre (IFSC) in Dublin, which is “partly” viewed in the industry a satellite of London.

“To a degree, Ireland has managed to persuade people to locate activities in the IFSC here in Dublin, which are satellite activities for things that are going on in London.”

He said there was a widely held belief that Britain would seek a closer relationship with the US if it left the EU.

This could become difficult to maintain without visas or passports.

He said Ireland had never faced – pre-1922 or post-1922 – immigration or passport control of any kind with Britain.

The free movement arrangements, which he likened to common citizenship, went well beyond the free movement enshrined in the European treaties and could be threatened by Britain exiting.

“If the external border of the EU was to be between Dundalk and Newry then people would need to be very careful to negotiate arrangements which would permit our current situation to survive, if that’s possible,” he said.