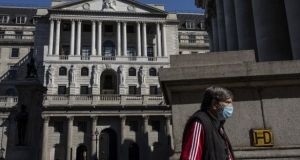 Bank of England governor Andrew Bailey said on Monday that the central bank should start to reverse its quantitative easing asset purchases before raising interest rates on a sustained basis, a reversal of long-standing BoE policy.

Mr Bailey said the time for such action was not now, but that the high level of central bank asset purchases “shouldn’t always be taken for granted”.

“When the time comes to withdraw monetary stimulus, in my opinion it may be better to consider adjusting the level of reserves first without waiting to raise interest rates on a sustained basis,” Mr Bailey wrote in an article for Bloomberg.

Mr Bailey was selected as governor of the Bank of England in December.

He previously worked for 30 years at the Central Bank, where he was central to efforts to shore up the British banking system during the global financial crisis.

In 2016 he moved to his current role running the Financial Conduct Authority (FCA), which he was responsible for cracking down on financial misconduct.