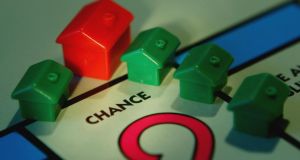 The average semi-detached house nationally now costs €209,944, up 3.5 per cent on the previous quarter, according to the Real Estate Alliance. Photograph: Gareth Fuller/PA Wire

The average cost of a three-bed semi-detached home in Dublin is now more than €400,000, according to the Real Estate Alliance (REA).

With an increase in newly-financed buyers coming to the market, it said prices rose by 5.6 per cent in both north and south county Dublin.

The increase was linked to the Central Bank’s recent decision to ease its mortgage-lending rules.

“The easing of the Central Bank restriction on lending for first-time buyers has had an immediate effect on the market with a large rise in numbers at viewings and potential buyers with mortgage financing – however, supply remains extremely limited,” the agency said.

The REA survey concentrates on the actual sale price of a typical stock home, the three-bed semi.

The average semi-detached house nationally now costs €209,944, up 3.5 per cent on the previous quarter.

Overall, the average house price across the country has risen by 10.9 per cent over the past 12 months – a marked increase on the 7.7 per cent rise registered to the end of December 2016.

The biggest percentage increases were smaller rural towns situated in Dublin’s commuter belt and in other the major cities.

The commuter counties of Louth, Meath, Kildare, Wicklow, Carlow and Laois rebounded after a relatively static end to 2016 to rise by 2.9 per cent in the past three months, with the average house appreciating by more than €6,000 in the quarter.

“There has been a recovery in bank lending, which has been reflected in the purchasing end, but the accelerated figures in the Dublin market particularly show that we are moving into a vendors’ marketplace,” said REA spokesman Healy Hynes.

“Many private vendors are now emerging from negative equity and can afford to make the move from the starter to the second home,” he added.

In a separate report, Investec said prices and rents were likely to keep rising until the end of the decade.

While noting the recent pick-up in house completions, it said the mismatch between supply and demand pointed to continued upward momentum in both prices and rents.

It forecast house price inflation of 6 per cent this year and 5 per cent in 2018.

“A host of leading indicators suggest that the delta between housing output and new household formation won’t be closed until the end of the decade (at least),” it said.

The brokerage also suggested the cooling effect of the Central Bank’s mortgage lending restrictions, introduced in February 2015, may have been somewhat overstated with demand “temporarily deferred” as prospective buyers saved more to meet the more stringent requirements.

“In any event, the recent introduction of [the Government’s] help-to-buy [scheme] and modest relaxation of the CBI rules have served to give an added kicker to prices,” it said.