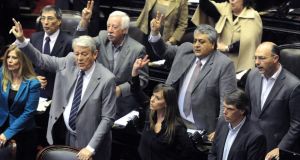 Members of Argentina’s chamber of deputies begin a debate over a bill to locally pay the bondholders who can not collect in the United States due a judge in New York on behalf of investment funds that are suing the South American country. Photograph: Fernando Sturla/EPA

Argentina’s Congress gave final approval today to a law proposing to restructure the country’s debt to skirt a US court ruling that forced it into its second default in 12 years.

The debt restructuring plan aims to enable Argentina to make payments on its foreign-held bonds locally or elsewhere beyond the reaches of the US court. It also encourages investors to move their Argentine debt from the United States or other foreign jurisdictions to either Argentina or France.

The effectiveness of the law is in question, however, given that US District Judge Thomas Griesa in New York has declared it illegal because it violates his order favouring creditors in a dispute over the country’s default in 2002.

“We don’t expect a significant participation rate, though the government will at least send the signal they want: in their view, they’re doing what they can to make the payment,” said Alejo Costa, chief strategist at local investment bank Puente.

The lower house of Congress passed the bill by an early-morning vote of 134 to 99 following a marathon debate that started Wednesday afternoon. The law had already been approved last week by the Senate.

Judge Griesa in June barred Argentina from servicing in debt restructured under US law in the wake of its $100 billion default in 2002 until it settled with hedge funds who rejected the terms of its 2005 and 2010 bond swaps and sued for repayment in full.

Argentina’s next coupon payment is due on September 30th. Argentine president Cristina Fernandez has accused Griesa of overstepping his bounds and interfering in Argentina’s national sovereignty. She announced the new debt bill last month to get around his ruling.

Economy minister Axel Kicillof acknowledged on Tuesday creditors had little appetite for the bond swap plan. “Regarding the swap ... parties that have any link to the US jurisdiction might not be willing to cooperate with Argentina because of the existing orders from Judge Griesa that rule the swap illegal,” said Ignacio Labaqui, local analyst for consultancy Medley Global.

If creditors refuse to participate in the debt swap, the government can still hope it will succeed in replacing the Bank of New York Mellon as trustee for bond payments with Nacion Fideicomisos, a unit of state-controlled Banco Nacion. That way, it can service its debt locally. But scepticism over this part of the plan is growing too, and Kicillof told politicians on Tuesday the government was open to suggestions from bondholders about where to make payments if they were unhappy with its proposal.