US Republican senator has $500,000 stake in Irish company 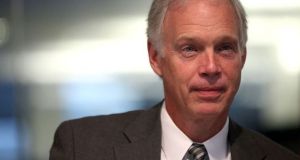 US Republican senator Ron Johnson values his shareholding in DP Lenticular at between $250,000 and $500,000. Photograph: Bloomberg

A US Republican party senator who defends companies’ rights to avoid taxes through international subsidiaries has a $500,000 (€455,000) stake in an Irish company, it has emerged.

Companies’ Registration Office records and the politician’s own declaration of interests to the US senate confirm his shareholding in DP Lenticular, which he values at between $250,000 and $500,000.

The Irish company distributes specialised plastic sheets used for printing 3-D images which his business, Pacur, in Oshkosh, Wisconsin, produces, in Europe, the Middle East and India. Official records show no direct connection between the Dún Laoghaire-registered business and Senator Johnson’s enterprise in the US.

His 9.9 per cent holding is just below the 10 per cent threshold at which US residents must inform the federal authorities of shareholdings in overseas companies. Details of it emerged as he is a US senator and must complete a register of all his interests.

DP Lenticular is 84 per cent-owned by Barcelona, Spain-registered Dodecinvest, which the Irish company states is its parent. Senator Johnson’s brother Barry, who now runs his Wisconsin business, is a director of the Irish company.

Daniel Pierret, who has an address in Brussels, is a director of both DP Lenticular and Dodecinvest, and appears to own all the Spanish company’s 3,006 shares.

It is an issue in the current US presidential and congressional elections. Senator Johnson is running for re-election. According to local media, he is one of a number of politicians who argue that the way to deal with the issue is to cut US taxes, which would provide an incentive to businesses to return operations from overseas. However, others want to see a clampdown on the practice with no concessions on taxes.

DP Lenticular had just under €1.5 million in net assets at the end of last year, its most recent accounts show. It had two workers, to whom it paid at total of €54,086 in salaries and social insurance. In 2014 its sole employee earned €40,277.

On the basis of Senator Johnson’s declaration, the company is worth somewhere between $2.5 and $5 million.