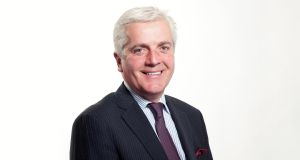 The company produces a range of vegetable and potato dishes ranging from traditional accompaniments of mashed potato and champ to complete ready meals.

The business grows, cooks, prepares and packages all products on the farm, and has listings in Ocado, Budgens, Asda, Sainsburys, Superquinn, Tesco, SuperValu, Waitrose and Dunnes Stores among others.

It also exports to the United States and United Arab Emirates, with sales outside Northern Ireland growing to more than £7 million in the past five years – an increase of 360 per cent. In the next 12 months it plans to expand operations into Qatar, Singapore and Hong Kong.

Mash Direct has revenues of £11 million and employs 121 staff including Martin’s two sons – Lance and Jack. The company has designed and engineered much of its process equipment internally and has achieved an A* grade BRC accreditation for the fourth year in succession - the only company in Ireland to achieve this status.

What vision prompted you to start up your business?
I was in a Marks & Spencer outlet in Bangor, Co Down, and noticed their mashed potato product at a retail price equivalent to £4,400 per tonne and compared it to the £80 per tonne I received for the potatoes harvested on my farm.

Having looked at many different potential projects, such as vegetable crisps, golf courses and developments of new villages, I followed more good advice and decided to “stick to what I was good at” – quality food – and searched for my solution there. I examined the market and was certain I could produce an offering which was better than the rest.

What moment or deal would you identify as the “game changer” for the company?
The “game changer” was the transition from servicing local independent retail outlets to servicing central distribution hubs with symbol groups such as Spar and Dunnes Stores. This opened an avenue to access significant volumes and gaining them were huge opportunities for the company and remain very memorable achievements. These established markets remain a source of strong growth.
What were the best & worst pieces of advice you received when starting out?
The best advice was when I was told that regardless of how good the product was, I should not produce any if I was not prepared to go out and sell it.

In terms of worst advice, it was more a case of frustrating experiences where people made promises to me who never intended to fulfil them. This was especially difficult due to extreme financial pressures and critical time being wasted.

Do you plan to extend your services to a new customer demographic or new sector in the next year?
We are growing the company’s presence in retail, food service and industrial ingredients. The company has just installed a new frying line from which we are already producing gluten-free croquettes and rostis.

We are also investigating the possibility of significantly extending our shelf life to over 60 days with the use of recently developed technology from Scandinavia. This has the potential for a global export market while maintaining the integrity of the brand developed over the company’s short history.