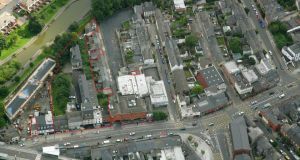 There has been a marked pick-up in demand for infill housing and commercial sites in the Dublin suburbs because of the perception that that there is still good value to be had.

Jonathan Preston of Savills has secured in excess of €3 million for a mixed retail, office and residential site of 0.36 of a hectare (0.88 of an acre) opposite the Luas stop in Ranelagh.

The centrepiece of the property is a car park or yard used as a village market which is accessed through an arch at 22 Ranelagh Road, beside the Superquinn store.

The property is currently producing a rental income of €250,000. It was assembled during the property boom by Garret Kelleher’s Shelbourne Development.

Dundrum site
Savills has also secured in excess of the asking price of €1.35 million for a site of almost an acre with two detached houses at Taney, Dundrum.

The purchaser is expected to seek permission for a small housing development.

The site at Taney Road/Taney Park is located within 100 metres of the Luas stop and includes a two-storey house in need of considerable renovation and a second dwelling, a three-bedroom bungalow.

Last Thursday, Lisney capitalised on the popularity of infill sites at a Sandycove location when it secured €2.2 million at auction for a site of just over half an acre at Elton Road with planning permission for four large houses.

The €550,000 per housing site valuation is easily the highest recorded in the Dublin market since property values crashed.

Savills has also found a buyer at close to €1 million for 21 hectares (52 acres) at Moyne Road in Portmarnock, Co Dublin.

Although adjoining land owned by Gannon Developments is zoned for housing, the Moyne Road property still has an agricultural zoning.

Also on the north side of the city, a UK developer has emerged as the top bidder at €4.5 million for a five-acre site at Botanic Road in Glasnevin.

A local area plan has stipulated that one acre should be set aside for a school. The new owner is expected to seek planning permission for between 12 and 16 houses per acre.