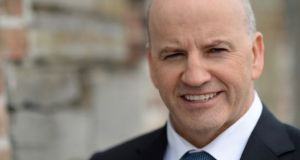 Mr Gallagher, in a sworn statement, said the temperatures in the Nokia office had been recorded by experts as being quite suitable and acceptable for an office environment, pending the installation of a replacement heating, ventilation and air conditioning system in January. File photgraph: Dara Mac Donaill

A dispute between a property company of former presidential candidate Sean Gallagher and Nokia Ireland over heating and cooling systems for a Dublin premises has opened before the High Court.

Nokia Ireland is seeking various orders against its landlord Clyde Real Estate, Blanchardstown Ltd including an injunction preventing Clyde from closing down, demolishing or decommissioning a heating, ventilation and air conditioning (HVAC) plant pending a full hearing of the dispute.

The application, which is opposed, opened before the High Court on Tuesday when Ms Justice Teresa Pilkington heard claims by Nokia that conditions in its office, where 100 people are employed, were described as being “Arctic” and difficult to work in due to the alleged failure to provide proper heating services.

In a sworn statement Mr Gallagher, who is CEO of Clyde Real Estate, disputes this claim. He said the temperatures in the Nokia office had been recorded by experts as being quite suitable and acceptable for an office environment pending the installation of a replacement HVAC system in January.

Nokia, represented in court by Michael Howard SC and Imogen McGrath Bl, says they had complained about excessively hot and cold temperatures at the premises since 2016.

Nokia initiated proceedings in June, when Ireland was experiencing a heat wave, claiming Clyde was in breach of a lease agreement of March 2015 and was required to provide heating, ventilating and air conditioning services in line with the terms of the lease.

Opening the case Mr Howard said his clients and its workers had been enduring cold temperatures in the office, far below the accepted 18-23C and Nokia was concerned temperatures could drop to a level where the employees would not be able to work.

Clyde’s claim the new HVAC system will be up and running early in the New Year was “unstateable”, he said.

Clyde had not properly informed Nokia about the landlord’s ongoing redevelopment works of the building and Nokia maintained such works were being carried out at times to cause major disruption and inconvenience to Nokia’s business, he said.

Clyde, represented by Ciaran Lewis SC and John Freeman Bl says it is in the process of replacing the former obsolete HVAC system at the premises. The replacement was due for delivery in early January and will be installed as part of ongoing works to the premises.

Clyde does not dispute it is required to provide HVAC plant to serve Nokia’s premises but claims, the lease agreement means the electricity and gas consumed in operating a HVAC was the responsibility of Nokia as a tenant. Nokia disputes this.

In response to Nokia’s claims, Clyde says the claims regarding the recent temperatures in the building were “difficult to understand” in light of empirically observed temperatures at the Nokia office.

It cited the contents of an expert report which states that the lowest recorded temperature in the office on November 20th last was 17.6 C and the highest was 22.8 C.

Clyde said its agents have regularly liaised with Nokia and sought to provide it with considerable notice of proposed works. It claims that Nokia ignored its correspondence for several weeks and chose not to respond.

Works have been carried out daily at the premises over several months, including the installation of a new fire alarm and new emergency lighting systems, and those works have been carefully planned to cause minimum disruption to Nokia and the other tenants, Clyde also says.