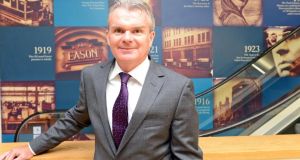 Retailers have asked Dublin City Council to scrap proposals to ban private cars from large parts of the city centre because they say it will have “serious implications for the future viability of city centre retailing”.

Retail Ireland, a division of employers’ lobby Ibec, has written to the council as part of a public consultation on the Dublin City Centre Transport Study, which proposes investing €150 million to make the city more pedestrian and public transport-friendly.

“Plans to enhance the city’s public transportation should never result in the displacement of private traffic to the point where large portions of the city centre are entirely inaccessible to shoppers who prefer to take their car,” wrote Conor Whelan, managing director of the Eason chain and chairman of Retail Ireland.

The lobby group told the council that shoppers who drive spend more than those on public transport, while cars are the second most popular form of transport for city centre visitors.

Retail Ireland wants the council, as well as the National Transport Authority and the Department of Transport, to give five separate commitments “as a matter of urgency”.

Firstly, it wants the plan adjusted to allow cars some access to the city centre.

It also wants an industry impact assessment into the economic consequences of banning cars.

It has also called for consumer research to be carried out on the impact of the ban, as well as a “detailed examination” of the effects in other cities where such a move has been implemented.

Finally, Retail Ireland wants the council and transport authorities to give a “formal commitment” to closely engage with city centre businesses on the plan.

Ray Hernan, the chief executive of Arnotts and a leading member of Retail Ireland, told The Irish Times he agrees with the council’s objective of making the city more welcoming for pedestrians.

“But there has been no research into how people will react.

“Will those people who currently drive in take public transport instead, or will they just get into their cars and drive to suburban shopping centres?” he said.

Mr Hernan said Retail Ireland would “love to collaborate” on research into the effects of a car ban, which he described as a “radical” measure.

“Let all stakeholders in this agree the terms of reference of a study.”

Mr Hernan insisted that difficulties with the plan are not confined to retailers, and that others, such as hoteliers, also have concerns.

Arnotts has made its own submission on the plan, which includes dropping the toll on the Eastlink bridge to prevent cars using city bridges to avoid the charge.

Retailers argue that shops selling bulkier items would be particularly hard hit by a car ban, as shoppers won’t carry such items home on public transport.

From today, the council has extended the “bus gate” that previously barred cars from College Green in peak hours, extending it to run from 7am until 7pm, Monday to Friday.