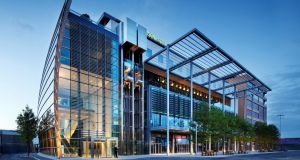 The Gibson Hotel, in Dublin’s north docklands, was recently put up for sale with an €87 million price tag by receivers.

Deka recently emerged as the likely buyer of the hotel, which was put up for sale with an €87 million price tag by receivers Paul McCann and Stephen Tennant of Grant Thornton.

The Competition and Consumer Protection Commission (CCPC) confirmed on Wednesday that the parties had notified it of the deal, paving the way for the regulator to investigate the sale before deciding whether or not to approve it.

Deka is buying a long lease on the the 252-room property, which is currently let to a subsidiary of the listed Dalata hotel group. The scale of the business means the commission must approve the sale before it can go ahead.

The CCPC will carry out a phase-one investigation of the sale, which can take up to 30 working days, before deciding whether to approve the deal or move to a more detailed phase-two inquiry.

According to a sales brochure for the Gibson, the expected rent for 2017 is €4.65 million. This comprises an annual base rent of €2.93 million, plus the variable rent, linked to turnover, forecast to be €1.72 million this year.

Built by Mr Crosbie and designed by architects Scott Tallon Walker, the Gibson opened in 2010. The National Asset Management Agency appointed Mr McCann and Mr Tennant as receivers in 2013.

Mr Crosbie’s property business owed the agency up to €500 million. The Three Arena, adjacent to the Gibson, and the Bord Gáis Theatre were also caught in the receivership. The CCPC’s announcement notes that Mr Crosbie owns the Gibson Hotel.

Under Irish competition law, the commission must investigate all takeovers involving businesses with a turnover of €3 million or more to ensure that they do not hit competition for goods or services in the Republic.

The €3 million turnover threshold means the regulator ends up investigating most sizeable commercial property deals. The commission approves the vast majority of such transactions.

Deka already owns the former Burlington Hotel in Dublin, which Dalata operates under the Clayton brand on a 25-year contract.

The German bank bought the Burlington in 2016 from US investment giant Blackstone.

DAA bonuses, Nama’s deadline for Ringsend, and EU solidarity fighting Covid-19 06:33
Coronavirus: Property rental in the jaws of the epidemic 05:55
I want to change my will quickly in case I fall ill. Do I need a lawyer? 05:50
Cold water poured on idea of ‘helicopter money’ 05:46
Stocktake: ‘Stay long humility and short hubris’ 05:40