Analysis: C&AG made clear that aspects of the sale were concerning 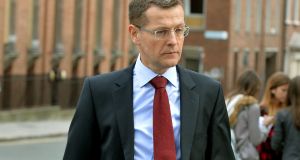 Comptroller and Auditor General (C&AG) Séamus McCarthy’s concerns about Nama’s sale of its Northern loans to Cerberus in 2014 for £1.3 billion run deeper than simply the price.

McCarthy’s report, published earlier this month, said that the controversial deal resulted in a “probable loss” to the State of £190 million - about €220 million.

Questions have been raised about the sale since it emerged that Frank Cushnahan, a former member of Nama’s Northern Ireland advisory committee, was advising one of the bidders, US firm Pimco, in return for a success fee.

In his first comments since he published the report, McCarthy made it clear to the Dáil’s Public Accounts Committee that he feels Nama could have achieved a better result for the taxpayer by taking a different approach to the sale.

“I feel that the process does not give me the assurance that another way of disposing of these loans, in a different composition or approaching the market in a different way would not have given us a better outcome,” he said.

McCarthy’s report highlighted the fact that potential bidders were put off by the restricted information that Nama provided on the loans and the properties on which they were secured, and that it wanted the sale completed in a limited time.

McCarthy told the committee that in subsequent sales, Nama got its agents to value the properties on which the loans were secured, but did not ask this of its adviser on Project Eagle, UK firm Lazards.

Nama’s chairman, Frank Daly, explained yesterday that the agency took a different approach to Project Eagle than to other sales because both the Northern Ireland Executive and the Republic’s Government wanted it handled discreetly to minimise the risk to the region’s wider economy.

Limited information was not the only problem. One potential bidder expressed disappointment that Pimco appeared to have an advantage over everyone else.

Pimco had to drop its bid in March 2014 after telling Nama it had agreed to pay a £15 million success fee to Cushnahan, Belfast solicitors, Tughans and US lawyers, Brown Rudnick.

Both law firms then switched sides to Cerberus which then assured Nama that no one connected with the agency was working on its bid.

Nama failed to convince the C&AG that it responded properly, either to Cushnahan’s involvement or to the fact that Tughans and Brown Rudnick then ended up working for Cerberus. McCarthy told the committee that while the agency did what was legally required, it should have gone further.

Answering questions, McCarthy suggested the agency could then have decided if any further action was warranted, including halting the sale.

Daly argued that halting the sale could actually have risked the State’s reputation and even created uncertainty over its liabilities just as it was exiting the EU-IMF programme imposed in the wake of the bank bail out.

However, they did not appear to convince the committee that Project Eagle delivered the best value possible at the time and that the sale was beyond question.

1 Irish company to test vaccines on volunteers deliberately infected with Covid-19
2 Coronavirus response must not kill the futures of Ireland’s young
3 FinCEN Files: Scale of challenge facing financial regulators revealed in leaked documents
4 Period of ‘extreme stress’ beckons for Irish businesses
5 FinCEN Files: Dublin-listed fund sent $23m to firm suspected of links to Russian crime boss
6 Ireland is in danger of losing the woods for the trees on emissions reduction
7 Covid-19 crisis appears to strengthen French resolve for EU fiscal harmonisation
8 Air travel never going ‘back to way it was’
9 Eir takes on extra staff as ComReg chases it on complaints
10 Is now the right time to reduce our working hours?
Real news has value SUBSCRIBE