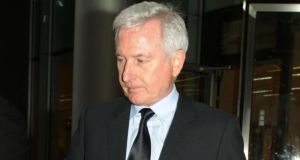 Property developer Paddy McKillen has succeeded in joining members of the Barclay family and related parties to a High Court case that he is taking against the National Asset Management Agency (Nama).

Mr McKillen claims Nama leaked private financial information about him to the Barclay brothers during his long- drawn legal battle against them over the ownership of the high-profile London hotel group, Maybourne.

The developer yesterday successfully applied to the master of the High Court to have the Barclay family and related parties, including Sir David Barclay, Sir Frederick Barclay, son Aidan Barclay and son-in-law Richard Faber into an action against Nama.

The State agency would not comment on the case, but it is understood it intends to defend it vigorously.

The case is the latest round in the litigation over ownership of the hotels, which were bought by a consortium of investors led by one-time property player Derek Quinlan in 2004.

If he wins this case, it is understood he will have grounds for claiming the case heard in the British courts should be declared a mistrial.

The case in the Irish High Court is based on material that emerged as a result of documents obtained by Mr McKillen’s legal team over the course of that hearing, and material gained from freedom of information enquiries.

He contends the Barclays and an estate agent who worked both for them and Nama in London lobbied the State agency for information about him and loans, part of which he refinanced last year with the aid of Colony Capital.

Papers initiating the action were filed some time ago and it is understood he will push for it to be heard quickly.

The dispute between the Irish property developer and Barclays, owners of the Daily Telegraph newspaper group and Ritz Hotel, dates to the deal done by Mr Quinlan.

Mr McKillen was one of the consortium that backed the hotel purchase. He owns 36.2 per cent of Coroin, making him the biggest single stakeholder and the Barclays own 28.36 per cent.

The remaining shares are owned by Derek Quinlan, who is known to be in financial difficulty and whose shares are fully charged to secure debts to Barclay-controlled companies.

Mr McKillen argues there are pre-emption rights the Coroin shares that effectively give him the right a proportion of Mr Quinlan’s stake, which would give him majority control of Coroin.