Flamboyant fitout and four-storey garden on offer at Fitzwilliam Sq 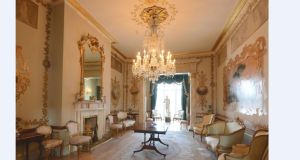 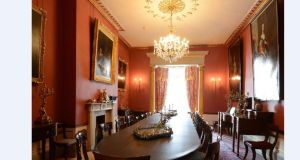 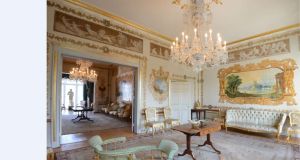 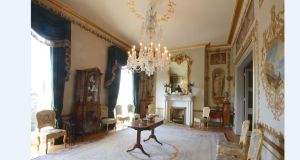 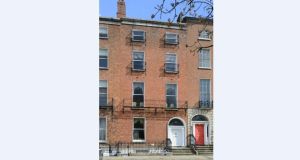 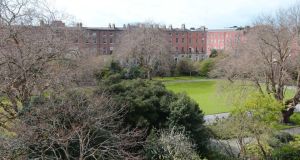 The view from 64 Fitzwilliam Square

Dublin’s most flamboyant corporate headquarters goes for sale today at over €4 million. The redbrick Georgian house at 64 Fitzwilliam Square is no different on the outside from others in the same exclusive enclave, but internally it has what is probably the most exotic fitout of any period house in the city – ornate plasterwork, colourful murals, marble pillars and fireplaces and a mass of gold leaf decorations.

The four-storey over garden level house was for many years the business headquarters and part-time residence of Edward Haughey, Northern Ireland’s wealthiest entrepreneur, who was killed along with three other people in March, 2014, when their helicopter crashed in thick fog close to his Gillingham Estate in Norfolk.

Mr Haughey, who was also known as Lord Ballyedmond, was the founder of the hugely successful Norbrook veterinary pharmaceutical company in Newry and was reputed to have been been worth £650 million (€910 million) at the time of his death.

He was appointed to the Seanad by former taoiseach Albert Reynolds and his successor Bertie Ahern. Both politicians as well as former taoiseach Brian Cowen attended some of the dinner parties in the city mansion along with a great many international bankers and businessmen.

Number 64 and number 63 were previously owned by wealthy businessman Sir John Galvin of Loughlinstown House until he sold them about 20 years ago. Sir John’s country estate at Loughlinstown was also sold around the same time and now accommodates the fast-growing Cherrywood Business Park.

John McNally of estate agent McNally Handy, who is handling the sale of the Fitzwilliam Square house, said it would be of interest to Irish and international buyers as well as embassies looking for an exceptional Georgian property.

Interestingly, Billy O’Sullivan of McNally Handy acted for a Meath-based businessman when he paid €3.2 million earlier this year for an adjoining Georgian house owned by businessman Sir Anthony O’Reilly.

The exquisite, delicate plasterwork and gold-leaf cornicing in the four main rooms clearly reveal their Georgian ancestry. There is a large reception room on the ground floor opening into a huge boardroom with a vast table to seat at least two dozen.

The original timber staircase provides access to the upper floors and at first floor level opens into a two-part drawingroom. Both are colourful, light-filled rooms which are beautifully embellished by decorative murals from the 1820s, and marble pillars and fireplaces. The rooms also have an array of gold-leaf decorations and well-chosen objets d’art.

The second floor has a private livingroom to the front and a kitchen to the rear, while the third floor has three bedrooms and a family room. The lower ground level was recently refurbished and is fitted out as a self-contained one-bedroom apartment with access to the front on Fitzwilliam Square as well as the rear from Pembroke Lane.

A double garage to the rear has folding doors opening onto Pembroke Lane where it can accommodate at least four cars.

There is a four-person lift servicing all floors. The house has oil-fired central heating and access to natural gas. The upper floors overlook the private park in the centre of the square which is accessible to homeowners.

1 Michael Smurfit: ‘I asked Trump to invite me to the White House for my 80th birthday’
2 ‘The recovery needs to be a full-scale economic renewal’
3 Small businesses are cannon fodder in zealous anti-virus experiment
4 ‘I’m so lucky to be in the Caribbean – a million miles from Derry Girls’
5 Covid-19 crisis to trigger 20% fall in FDI
6 Tax and the Pandemic Unemployment Payment: Your questions answered
7 Charlie Chawke plans 290 apartments and hotel on Goat pub site
8 Ireland stands to benefit in a big way from investing in public transport
9 Virgin Media’s Gavan Reilly named most influential Irish journalist on Twitter
10 Aer Lingus to deploy controlled boarding and contactless passes
Real news has value SUBSCRIBE