Berlin bubble? Property is booming and rents are rising

German banks say asking prices out of step with reality 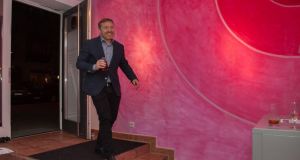 Billy Telford in his Berlin office, complete with artwork by Eric Powell. “There’s a political game going on here, blaming foreigners coming here with bags of money and spending it willy-nilly.”

Billy Telford scored a coup for his Berlin property company, Next Estate, when he nabbed Ai Weiwei as the Chinese art superstar happened to be passing by the shop one day last year.

Telford, a Laois man, asked Ai’s advice about some new art for his newly renovated premises in the Prenzlauer Berg district. Ai brought in fellow artist Eric Powell and came along to the opening of the resulting two-part exhibition: a playful take on estate agent price signs and a large-format geometric wall painting using Carmine pigment, the original colour of Campari.

“Berlin’s becoming more international, and I think it’s important to bring something more than just the economic part of the property transaction,” says Telford, who has done good business in the booming Berlin property market since coming here in 2008.

The capital is one part of a wider German property boom, which saw total sales (of apartments, houses and land) of more than €210 billion in 2016. Rents rose a record 8 per cent on average last year in Germany’s major cities, according to a study by Jones Lang Lasalle, while property prices rose an average of 10 per cent. Compared with 2004, average property prices in Berlin have jumped 115 per cent.

Just don’t call it a bubble.

No spikes in sight

German property agents dismiss all such talk, insisting the market here lacks a crucial prerequisite for a bubble: a spike in lending to mirror the spike in prices. Instead, they insist, Germany’s property market in general, and Berlin’s in particular, was undervalued and has undergone a correction, adopting a new role as safe haven for euro zone investors.

The years since then have seen a second factor at play: the knock-on effect of the ECB’s negligible interest rates. With home ownership in Germany averaging about 45 per cent (and dropping as low as 14 per cent in Berlin), below-inflation interest rates are nudging Germans from renting to buying, and bringing local figures up to European averages.

Some 80 per cent of Billy Telford’s clients are German; all are interested in living or investing in Berlin, he says. “But there’s a political game going on here, blaming foreigners coming here with bags of money and spending it willy-nilly.”

He sees three factors at play in Berlin’s boom: dropping unemployment, low interest rates, and a population spike of some 50,000 alone last year.

Rising rents and fears of gentrification are hot button issues in Germany’s looming election season, where rising land prices mean builders are only targeting the higher-end of the market. For the rest of the population, the new reality is longer queues for flat viewings within limited regular housing stock. In Berlin, you are now likely to be one of 33 would-be tenants competing for a single apartment; in Cologne it is one in 53; in Munich, one in 77.

Perhaps the most drastic warning of late came last month from Empiraca. In a report, the real-estate market research institute warned that asking prices, particularly in Berlin and Munich, had lost touch with market realities. Corrections of up to a third were “certain” in Berlin, it said, and likely in Munich.

Even the Bundesbank, which has studiously avoided the term “property bubble” until now, is now sounding the alarm.“According to current appraisal results, prices in cities were between 15 and 30 per cent too high last year,” the bank said of apartment prices in larger German cities.

The price dynamic now visible on the property market, it added, has gone beyond anything that can be explained by regular economic and demographic factors.

Property prices in major German cities rose 8 per cent overall in 2016, the Bundesbank says, compared with an average of 6.75 per cent a year between 2010 and 2015. Rents are also rising but, at 4.75 per cent last year, are not keeping up with the property prices rises.

“Whoever still buys property here, even though the rent is no longer enough to cover the financing, is a speculator waiting for higher prices,” says Hans-Werner Hansmann, a retired Hamburg economics professor, who argues that major German cities entered bubble mode two years ago.

More cautious voices disagree, saying bubbles are less likely here given the large number of cash buyers and conservative rather than reckless borrowing. There is also some confidence that Germany’s tradition of 10- and 15-year fixed rate mortgages will shield the German borrowers from an end to the ECB’s low interest rate policies.

And there is a final factor often forgotten by the bubble Cassandras, they say: while big city prices are rocketing, property prices are stagnating or declining in less economically robust regions. If markets in Berlin and Munich come down with a cold, there is less likelihood of the entire country catching the flu.

So, will this time be different? It’s notable how, while Ireland had its mythical “soft landing”, German property experts are now talking openly of the need for a “valve” to reduce pressure. The federal government in Berlin has already begun work on new tools for the bank regulator to increase hurdles to property financing.

And, after years doing nothing, major German cities have redoubled efforts to boost property market supply to meet demand. According to Germany’s IW economic institute, just one-third of the apartments needed between 2011 and 2015 were actually built.

As prices and sales continue to rise, however, the country’s property market optimists now find themselves penned in by realists and pessimists.

Germany’s second-largest lender, Commerzbank, believes prices have been rising too fast since 2011 and that property is already 10 per cent overvalued. Commerzbank economist Ralph Solveen predicts prices are likely to continue to rise for some time, but warns: “The longer the boom lasts, the greater the danger that it will come to massive exaggerations.”

Stefan Mitropoulos, a property expert with state bank Helaba, doubts that a crash is coming but doesn’t rule out a price correction similar to that experienced in Germany in the 1980s and 1990s.

After a bumper run, even Germany’s real estate experts in the Germany Property Federation have adopted a more sobre outlook. While a decline in investment volumes was “not foreseeable”, the federatuib said in its spring assessment that rents – after sharp rises in recent years – will likely flatten out, and that apartment prices in big cities could fall by up to a third in the next five years.

It had a particular warning for would-be investors in the German capital: “For Berlin, the party is over. Whoever comes now can help with the clean-up.”

Back in Prenzlauer Berg, Billy Telford is guarded about whether Berlin’s property market is a bubble primed to burst.

“I’m hesitant come out and say that it is not going to happen, once bitten twice shy,” he says, a nod to to his own experiences in Ireland. But he points to different fundamentals. In Berlin, high tenancy levels means that even a slowing market will have a different effect here than in Ireland.

“You’re not going to have 80 per cent of the market selling at the same time. Rents might fall away a bit, but people are always going to want to move in.”