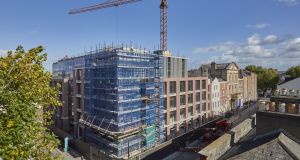 About 800 AIB employees, including chief executive Bernard Byrne, will move to the 115,000sq ft office building on Molesworth Street in 2019

AIB has signed a 20-year lease to move its corporate headquarters to the centre of Dublin from Ballsbridge from 2019.

About 800 employees, understood to include chief executive Bernard Byrne and some of his leadership team, will transfer to the 115,000sq ft landmark office building on Molesworth Street being developed by Irish property fund Iput.

The 71 per cent State-owned bank will continue to use its Bankcentre complex in Ballsbridge in Dublin 4, where 4,000 of the group’s 10,400 staff are based, for the “majority of our head-office teams”, the lender said in a statement.

“Molesworth Street is the heart of the emerging business district in Dublin. This location positions AIB in the centre of the city and enables us to enhance engagement with our customers and shareholders,” said Mr Byrne.

Iput, which also owns another property on the same street, acquired the original building in March 2013 for €18 million. Redevelopment of the site commenced in 2016 and is due for completion early next year with a final construction cost of €45 million.

The seven-floor property is the largest redevelopment project undertaken by Iput so far. Once completed, it is expected to deliver an income yield on cost for the fund of 11 per cent and a profit on cost of 129 per cent.

“The completion of this major letting to AIB means we have now fully pre-let all of our development projects, bringing our total lettings for the year to date 2017 to 400,000sq ft, generating €16 million in new rent for our shareholders in 2017,” said Iput chief executive Niall Gaffney.

JLL and Knight Frank handled the letting for Iput, while AIB was advised by Cushman & Wakefield.

The Financial Services Union (FSU) said in a statement that it is seeking a “comprehensive agreement on staff relocations”, as the Iput office deal is the latest in a series of similar announcements by the bank.

“In recent months we have seen significant movement of staff between locations in Sandyford, Swords and Naas. There were serious information deficits and other issues surrounding these moves. These cannot be repeated again,” said Billy Barrett, senior industrial relations officer with the FSU.

“We will be consulting widely with our members affected by the Molesworth Street announcement and engaging with the bank to ensure that all their concerns in relation to this move are dealt with.”

1 Michael Smurfit: ‘I asked Trump to invite me to the White House for my 80th birthday’
2 Ireland stands to benefit in a big way from investing in public transport
3 ‘The recovery needs to be a full-scale economic renewal’
4 Ryanair expects air fares to fall when flights take off again
5 Tax and the Pandemic Unemployment Payment: Your questions answered
6 Household savings soar as consumers stop spending
7 Minister calls on EU to act against tobacco firms ‘undermining’ menthol ban in Ireland
8 Small businesses are cannon fodder in zealous anti-virus experiment
9 Consumers hesitant about travel as Covid-19 restrictions ease
10 Kollect reports rise in revenues as Covid-19 hits waste collections
Real news has value SUBSCRIBE