Retail building is located on one of busiest stretches, close to Nassau Street junction 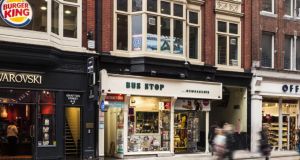 A well-located retail building going for sale by tender on Dublin’s Grafton Street will be of interest primarily to Irish investors who believe that the ongoing recovery in city centre property values will continue.

Lena Clarke of Lisney is quoting €3 million for the Bus Stop newsagents shop at 6 Grafton Street, which will give an initial return of 7.65 per cent. Bannon are the joint selling agents.

The price being sought for the four-storey over basement building reflects the significant fall in capital values that has taken place on Grafton Street as well as in most other city centre locations since the property crash.

International researcher IPD has calculated that Grafton Street values alone declined by around 65 per cent between 2006 and last year. The Government has since given an important boost to the commercial market by allowing profits from an investment such as this to remain tax free as long as the asset is held for seven years.

The Bus Stop newsagents is located along one of the busiest stretches of Grafton Street close to the intersection with Nassau Street.

Grafton Street’s fortunes have been considerably strengthened in recent months with the arrival of several high profile traders including Massimo Dutti, Levi, Cath Kidson and Vans.

The most significant property sale in the Grafton Street area in recent months involved the Avoca store on the adjoining Suffolk Street, which is reputed to have been bought by a city businessman for €7.2 million, a price that will show an initial yield of 5.71 per cent.

Prior to that, number 46 Grafton Street let to Hutchinson 3G Ireland Ltd made €6 million, which will give the new owner a return of 7.1 per cent.

By far the largest sale last year on Grafton Street was the disposal of the adjoining River Island and Wallis stores for just over €40 million, a 65.2 per cent drop from the €115 million paid for them in 2007. The latest yield is around 6.85 per cent.

A sale of a different kind on the high street was recently completed when CBRE sold two small vacant shops at the bottom of the street to Dualway Sightseeing Tours for €3.65 million.

The company is to occupy number 118, which was previously rented by UK travel agent Thomas Cook. The adjoining unit, which previously traded as Petersons Cigar Shop, is now available for rent through George Ross of Jones Lang LaSalle. The asking rent is €70,000 per annum.

6 Stocktake: Is a market correction looming?