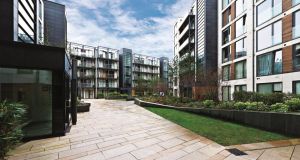 Four Dublin apartment developments funded by Bank of Scotland (Ireland) during the property bubble are now to be sold at substantial discounts after being put into receivership by the bank.

The 338 apartments, currently producing over €3.8 million in rental income, will be sold by Dessie Kilkenny of Savills for four individual receivers.

The best known of the four schemes is Rockbrook in Sandyford, a highly ambitious mixed-use project that landed the Cork-based Fleming group in serious financial difficulties. The company spent in excess of €243 million assembling 11.3 acres, paying €165 million for the former Allegro site of 7.7 acres and €80 million for a smaller piece of land owned by Aldi.

Most of the apartments are currently rented and producing €836,000 per annum. There are 21 three-bedroom apartments which rent for an average of €1,300 per month; 30 two-beds which make €1,100; and 12 one-beds which fetch around €1,000. A purchaser will be able to bank on a gross yield of around 9.1 per cent. The receiver is George Maloney of Baker Tilly.

A price of €9.5 million is being sought for all 83 apartments and six retail units in the Kings Court development at North King Street, Dublin 7, which was promoted by Eugene and Deirdre O’Neill.

Gross return
Rents of €978,000 are currently coming from the apartments and three of the six shops in the development.

There are 26 one-beds, 53 two-beds and four three-beds which are showing a gross return of 10.3 per cent.

Allowing for a valuation of €350,000 on the six shops, the average price of individual apartments works out at €106,000. Tom Kavanagh of Kavanagh Fennell is the bank receiver.

A guide price of €8.5 million has been set for the sale of 102 of the 198 apartments built by Elliotts in the Priorsgate scheme at the junction of the N81 and Greenhills Road in Tallaght. The sale also includes 2,508sq m (27,000sq ft) of commercial buildings and a separate office block extending to 543sq m (5,849sq ft) on an adjacent site of 0.44 of an acre. The scheme includes 49 one-beds, 47 two-beds and six three-beds which will show a gross return of 12 per cent based on the current rent roll of €1.03 million. Stephen Tennant of Grant Thornton is the receiver in this case.

Liam Carroll’s Danninger company was the developer of the Camac Crescent apartments in Inchicore which has a total of 110 units, 90 of which are included in the sale. They are currently producing a rental income of around €1 million. Savills is seeking €8.5 million for the 90 homes which include 49 two-beds, 20 three-beds and 21 one-beds.

The remaining units along with an on-site crèche are owned by a co-operative housing group. David Hughes of Ernst & Young is the receiver in this case.

All four developments have one thing in common: the vast majority of the 338 apartments in the various schemes are rented and showing good returns. This market is expected to do even better in the future because of the virtual ending of buy-to-let sales due to the absence of bank funding and the ever increasing taxes being introduced by the Government.

It is a different matter altogether for completed apartment blocks which are in constant demand from Irish and overseas investors because of the strong letting market and the real prospects of rental growth over the next few years.