Site to include 14-storey office block, shops and restaurants 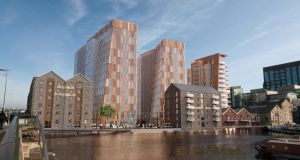 Plans for a €150 million redevelopment of the historic Boland’s Mill site in Dublin’s Docklands, including the construction of a 14-storey office block, will be lodged with Dublin City Council tomorrow.

The application, which proposes the restoration of the five original, but now derelict, mill buildings, and the construction of three new office and residential blocks, is the first significant plan to be made under the fast-track planning scheme for the Docklands.

The Docklands Strategic Development Zone (SDZ) scheme, approved by An Bord Pleanála last May, allows property owners to secure construction permission from Dublin city planners which cannot be appealed to An Bord Pleanála.

The application is being submitted to the council by Mark Reynolds and Glen Crann of Savills, acting on behalf of Nama. Boland’s Mill was previously owned by developer Seán Kelly’s Benton Properties and a Treasury Holdings company.

The development is one of the largest proposed for Dublin since the crash and would provide almost 30,000sq m of office space for about 2,300 workers, 42 apartments, shops, cafes, restaurants and an exhibition building.

The tallest building proposed would be 14 storeys and 53m in height. A 15-storey apartment block is proposed, but it would be lower in height at 47.8m. The third new building, also an office block, would be 13 storeys and up to 49m.

Under the SDZ scheme a building of 15 storeys is permissible at the Boland’s site. Dublin’s current tallest commercial building, the Google-owned Montevetro building on nearby Barrow Street, is 15 storeys tall, but buildings of up to 22 storeys or 88m could be permitted at two locations in the Dockland’s development zone at the Point Square on the north side and Britain Quay on the south side.

Plans to build three 12- to 16-storey office buildings and a boutique hotel on the site were rejected in 2006 on the grounds they would be out of scale with the area.

If permission is granted for the new proposal, development could be completed by the end of 2017, according to Savills.