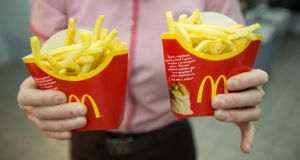 Swords, a relatively prosperous area with a large youth population, ranks as Ireland’s fast food capital, according to a study by the online doctor service Treated. com.

The research found the North Dublin town had the greatest concentration of takeaways, including McDonald’s, Burger King, KFC, Subway, Domino’s and Costa, of any town or city in the State on a per capita basis, equating to 0.24 stores per 1,000 people.

It was followed by Limerick, Cork, Waterford, Dundalk and Galway.

Bray in Co Wicklow, which shares a similar population size to Swords, had the lowest number of outlets per capita with 0.09 stores per 1,000 people, nearly half that of Dublin.

It must be noted, the study did not include local, privately run fast food eateries.

The research indicated the town with the highest number of McDonald’s per capita was also Swords, with one store for every 18,642 people.

Bray has just three of the above outlets in total, one McDonald’s, one Domino’s and one Subway, serving a population of 31,872.

The study noted that while obesity and unhealthy eating habits do not get the same coverage as in England and Scotland, a recent study in The Lancet suggested obesity in Ireland was higher than the European average.

Nearly a quarter (23 per cent) of Irish men and women were obese, with a BMI of 30 or over. In the UK, the rates were only slightly higher, with around 57 and 67 per cent of women and men respectively being overweight or obese.

The question of whether fast food outlets cluster in more socially deprived areas is frequently asked by public health experts, who point to a growing dietary divide between rich and poor.

While in this study that link was unclear, GP Wayne Osborne of Treated.com identified the relationship between theconsumption of takeaway foods and the growing obesity epidemic, along with itsimpact on further long-term health complications.

He said the primary appeal of fast food was its convenience and relative cheapness.

“If you’re planning on being out for the day at a local shopping centre, don’t leave the house on an empty stomach. Eat a good size, healthy breakfast or lunch at home,” he said.

“Similarly, don’t give a rough day at work a chance to sway you into buying comfort food from a fast food retailer.

Make a sandwich or a salad at home in the morning, take it with you and keep it in the fridge.”

“If you feel like having something a little more substantial on your lunch break, try to plan ahead.

“ Instead of going out for lunch, cooking up a pasta bake at home the night before and warming it up in the microwave at work might save you a few euros, not to mention a few calories,” he said.