Government code of practice to be published “shortly” 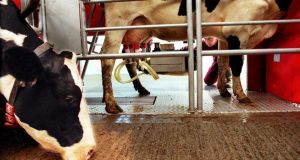 Milking it: reportedly, sharp practices by supermarkets are common in the grocery trade. Photo: Matt Kavanagh


Food producers and suppliers have said some supermarket chains are still seeking hundreds of thousands of euros from them to get their products on the shelves or ensure that they stay there. Seeking so-called “hello money” to stock products on shelves is illegal but suppliers say these practices are commonplace.

Several cases have come to light in recent weeks, but suppliers refuse to allow their names to be used, fearing they will lose their contracts with the supermarkets in question.

Two food companies said they had been threatened with having their products delisted from one chain if they didn’t pay supports of more than €500,000, while a dairy supplier paid a seven-figure sum to fund a promotion and price discount drive.

Refusal to pay bill
Another supplier said retailers often refused to pay outstanding payments at the end of each year and in some cases he had written off payments amounting to €300,000.

One supplier said over the course of two years retailers had variously demanded €200,000 to help fund a price reduction; sought €80,000 to avoid delisting him; and, on one occasion when he was out of stock, sought full compensation for the loss of sales incurred.

Another retailer demanded 5 per cent of turnover for adding the product to its portfolio. One supplier said the cost of promotional displays in-store had risen by up to 8 per cent each year in recent years.

Shane Dempsey of Food and Drink Industry Ireland said these reports of sharp practices by supermarkets came as no surprise, as they were common in the trade.

He said it highlighted the need for a code of practice for the sector and asked why it was taking so long. “Some businesses have gone out of business because of a combination of the downturn and increasing demands from retailers to stay ahead of each other.”

Transparency
For years, food and drink producers and suppliers have been calling for a code of practice to ensure they can operate in a fair, transparent market.

A spokesman for Minister for Enterprise Richard Bruton said the code of practice was on the Government’s “A list”, and a priority for this Dáil term. He said it was part of a wide-ranging Bill, the Consumer and Competition Bill, that also dealt with the merger of the Competition Authority and the National Consumer Agency, as well as the recommendations of the expert group on media mergers. He said the Bill was currently being drafted and publication was expected “shortly”.

Retail Ireland, which represents a wide range of large retailers, said a national statutory code of practice would be “a retrograde move” that would put both Irish suppliers and Irish retailers at a competitive disadvantage in relation to their European peers.

1 Election adds to headaches for AIB boss Colin Hunt
2 Fast-growing frozen food group has a strong appetite for success
3 Irish people like nothing more than being bribed with their own money
4 Construction body calls for loan scheme to help first-time buyers
5 The Irish economy is thriving but if you’re not feeling it – here’s why
6 Labour Court expected to rule on Paddy Power workers’ claim
7 GoMo is being investigated by advertising authority
8 Hogan warns Britain on US trade deal as EU set to impose tariffs
9 Barclays to cut 100 senior roles as lender seeks to rein in costs
10 Being in Nama regarded as stigma in UK, O’Flynn tells court
Real news has value SUBSCRIBE