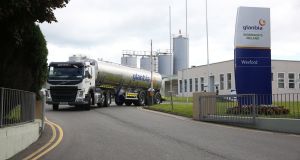 The GII facility in Wexford.

The company said the plant, which is located on the outskirts of Wexford town, would create up to 70 jobs during the construction phase, as well as securing the future for the 48 people employed at the facility.

GII, a 60:40 joint venture between Glanbia Co-operative Society and Glanbia, is seeking permission to begin work on the expansion towards the end of the year, with a view to having the work completed early in 2017.

“This proposed investment is a tremendous vote of confidence in the staff at our Wexford plant, which produced record volumes of cheese in 2015,” GII chief executive Jim Bergin said. “Our milk suppliers in Wexford are amongst the fastest growing and most progressive in the Glanbia catchment area. This investment will also enable further growth in our highly popular Wexford Cheese brand, which is being marketed in Ireland, the UK, the USA and, most recently, the Middle East.”

Glanbia bought Wexford creamery in 2014. Milk supply from GII’s farmers has risen 22 per cent since milk quotas were abolished 10 months ago.