The Irish Times/Irish Sports Council Sportswoman Award for May 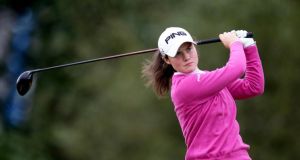 Leona Maguire’s form in the US has been so exceptional she has reached the top of the world amateur rankings after three tournament wins in her first season. Photograph: Cathal Noonan/Inpho

Career-wise, our joint Sportswomen of the Month for May come from opposite ends of the spectrum, 20-year-old golfer Leona Maguire embarking on her college career in the United States in the last 12 months, while fellow Ulsterwoman Madeline Perry called time on a professional squash career that began 16 years ago and saw her reach the heights of the third ranked squash player in the world.

It’s 10 years since Maguire and her twin sister Lisa first burst on to the golf scene, between them winning European and World underage amateur titles before they’d even hit their teens. That success continued right up until they took a year out to focus on their Leaving Certificate, and once that was done they both set sail for Duke University in North Carolina.

While both Cavan sisters made an immediate impact on the Duke golf team, Leona’s form has been so exceptional she has reached the top of the world amateur rankings after three tournament wins in her first season. And for good measure, she won the 2015 Annika Award, named in honour of Annika Sorenstam, one of golf’s most successful female players, voted the top female U.S. collegiate golfer of the year by players, coaches and members of the media.

Having won 11 World Squash Association Tour titles and 15 Irish National Titles, Perry was no stranger to Maguire’s level of success when she was competing on the international squash circuit. The 38-year-old from Banbridge, County Down turned professional in 1999, broke in to the world top 50 a year later, and, in 2011, made it in to the world top three.

Having announced in April that the Irish Open would be her final tournament on the professional circuit, Perry bowed out in style at Fitzwilliam Lawn Tennis Club by beating Nicolette Fernandes of Guyana in straight games in the final to win the event for the sixth time. And, in May, she ended her career with Ireland by helping the team win bronze at the European Championships in Denmark, beating the hosts in the play-off.

Would she describe her career as satisfying? “Ten times better than that,” she said. “It’s only when you stop and look at it you think, ‘yeah, that wasn’t too bad’.”

So, while Perry calls time on an outstanding career, Maguire is only warming up. But so far, it hasn’t been too bad at all.

December: Ann Marie McGlynn (Athletics). The Offaly woman captained the Irish senior women’s team to an unlikely bronze medal at the European Cross-Country Championships in Bulgaria, combining with Fionnuala Britton, Sara Treacy and Michelle Finn to beat France by a point to a place on the podium.

January: Gráinne Dwyer (Basketball). For the second year running, Dwyer was the MVP in the National Cup final, this time driving Team Montenotte, Glanmire to success over Killester, top-scoring in the game with 20 points.

February: Sophie Spence (Rugby). The driving force behind Ireland’s Six Nations victories over Italy and England, the 28-year-old lock going on to play an equally influential role in the victories over Wales and Scotland that clinched the team’s second title in three years.

March: Niamh Briggs (Rugby). The Irish captain led the team to a memorable Six Nations success, one that included only their second ever victory over world champions England. Briggs marked her 50th cap by contributing 23 of Ireland’s 73 points in the mauling of Scotland that sealed the title.

April: Katie Walsh (Horse racing). The Kildare jockey became only the third woman, after Ann Ferris in 1984 and her sister-in-law Nina Carberry in 2011, to win the Irish Grand National, riding the Sandra Hughes-trained Thunder And Roses to victory at Fairyhouse.