Towell earns Dundalk a late share of the spoils against Bohs

League leaders strike late on to deny Dalymount side 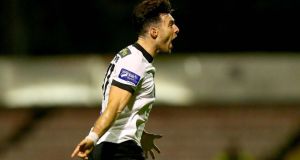 Keith Long’s Bohemians side have done more than any other club so far to keep the title race alive this season.

But unfortunately for the other title contenders, their cross-city rivals couldn’t quite hang on to take all three points on this occasion.

Their win in Oriel back in June is the only time the champions have been beaten in the league this season and with seconds remaining here it seemed as though Bohs were about to repeat the trick.

Then that man Richie Towell stepped in with a twice deflected last-gasp strike that salvaged a draw for the visitors.

It was agonising stuff for the home support who were on the verge of having something really memorable to celebrate.

Ismahil Akinade’s goal 12 minutes from time would certainly have been a worthy winner of a highly entertaining game. Not for the first time this season, though, Dundalk created a little luck for themselves through their never-say-die attitude.

Dundalk had won seven and drawn two in the league since losing that last time the two sides met but there were signs here of the defensive uncertainly that has occasionally been a feature of their play through the summer months.

It was understandable when they were chasing the game but more striking when they were not and the feeling that the visitors’ centre-backs could be got at might have influenced Long’s decision beforehand to push Paddy Kavanagh forward to play as a second striker.

The opening goal was simple enough stuff with Akinade sending in a looping cross from the right that Dane Massey seemed to misjudge, allowing Keith Buckley the opportunity to take the ball down and pick his spot.

Not long after that, Akinade should have had one himself with the 21 year-old getting on the end of a long ball then turning Brian Gartland with remarkable ease. Andy Boyle quickly got himself between the striker and his target but there was still a fair bit to aim at and he missed it all.

At that stage, Bohemians were edging it with the champions failing to gain much advantage from their extra man in midfield but there was always a sense that a single goal wasn’t going to be enough to see them through to the end.

That suspicion grew as Dundalk started to show some improvement in the third quarter with the visitors creating a couple of chances, and it was confirmed when Stephen O’Donnell got to pick his spot after good work down the left by Daryl Horgan on the hour.

The hosts, though, continued to pose a threat on the break and after a couple of occasions when they couldn’t quite finish what they’d started, Akinade scored the goal of the night.

Dean Delany cut out Richie Towell’s cross then fed Lorcan Fitzgerald whose long ball forward was brilliantly chested on by the Nigerian from between two defenders then dispatched very coolly beyond Gary Rogers to the bottom right corner.

Towell’s equaliser deep into injury time wasn’t nearly so pretty but it was every bit as important.