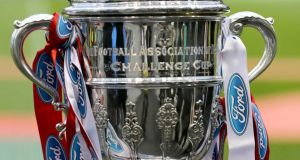 All the goals came after the break at O’Shea Park, with striker Patterson breaking the deadlock with a header from Barry McNamee’s free-kick eight minutes in.

In a late flurry of goalmouth action, Ryan Curran scooped home a rebound for the second Derry goal on 86 minutes. Patterson then got his second two minutes later with a calm finish before completing his hat-trick with a crisp volley right on 90 minutes.

Bluebell United provided the only surprise of the weekend when the Dublin non-league side held Roddy Collins’ First Division Athlone Town to a 2-2 draw at Baldonnel.

Though, Tony Griffiths put the Leinster Senior League side ahead from a seventh-minute penalty, two fine strikes from distance from Ian Sweeney, in the 31st and 66th minutes, looked to have booked Athlone’s passage.

But Robert Douglas earned Bluebell a deserved replay at Lissywollen tomorrow night with a stunning volleyed equaliser from some 30 yards in the 76th minute.

Away win
Goals from Danny Ventre and Anthony Elding earned Sligo Rovers a 2-0 away win to Waterford United.

Skipper Ventre turned well in the box to fire home the opener on 21 minutes after Waterford failed to clear an Aaron Greene corner.

Striker Elding added the second in first-half stoppage time when converting a cross from Greene.

Rory Gaffney scored twice as Limerick saw off the challenge of Glenville, promoted from the third tier of the Leinster Senior League last week, with a 3-0 win at Whitehall.

Axel Bossekota then set up Gaffney for his second on 56 minutes before Bradley added the third direct from a free-kick 10 minutes later.

O’Sullivan headed in his first from a Mark Salmon cross on 15 minutes. The second arrived just before the hour mark when O’Sullivan scored from the rebound after Pike goalkeeper Gary Neville parried his initial shot.

The hat-trick was completed on 75 minutes as O’Sullivan headed home a cross from Keith Quinn. Salmon added Longford’s fourth goal from a stoppage time penalty.

Goals from Brian Fitzgerald and Conor Meade saw Cobh run up a 2-0 lead within 11 minutes.

Striker Meade added his second from a penalty to make it 3-0 four minutes into the second half before Bobby Donoghue scored Cobh’s fourth goal six minutes later.

Thomas Dunne got a goal back on 61 minutes as St Patrick’s staged a late rally. Brian Mooney added another right on 90 minutes before Dunne got his second from a penalty five minutes into injury time.