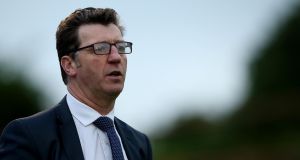 Roddy Collins will attend Athlone Town’s game against Shelbourne ahead of his appointment as the club’s manager. Photograph: James Crombie/Inpho

Athlone Town announced on Thursday night that Roddy Collins will return to the club for his second stint as club manager with the 55-year-old due to watch Friday evening’s game against Shelbourne from the Tolka Park stands.

A statement released by the club confirmed that Collins will take charge until the end of the season, starting with the meeting with Cabinteely on May 19th. Ricardo Cravo will remain in place for the game against Shels.

The club is awaiting the outcome of an FAI investigation into allegations of match fixing relating to the game against Longford Town a couple of weeks ago, with most of the club’s players and coaching staff having been interviewed by association officials earlier this week.

On the face of it, Collins seems an unlikely appointment in the current circumstances. Talks had been ongoing between the Dubliner and the club for several weeks and it seems that confirmation of his appointment has been slightly delayed by the former Athlone Town player having been away with his family this week.

Collins led Athlone to promotion in 2013 but left the club before the start of the following season. He also got Monaghan United up during his time there although his more recent spell at Waterford United did not go especially well.

At Athlone, the hope will be that he can build on last week’s win over Cobh Ramblers at what is an incredibly difficult time for the club.

Cork City, meanwhile, head to Galway where a victory would take them to within two wins of Bohemians’ almost 100 year-old record for the best start to a League of Ireland season.

Galway United’s league position would suggest a comfortable enough path to win number 13 but recent form might suggest otherwise with Shane Keegan observing “if you include the EA Sports Cup we’ve only lost one of our last 11 games”.

“Now for a team playing catch-up you would have to admit that too many of those have been draws but for a team in our position, there’s a fair amount of confidence, even going into a game against Cork, in particular because of the Dundalk result.

“We fancied ourselves to catch them on the break that night and that’s the way it transpired. I don’t think I’d be giving away any trade secrets if I told you that that will be the plan this time as well. Cork are clearly a very good team, though, and they are playing at eight, nine or 10 out of 10 then it will be a difficult night for us but if they’re only at six . . . ”

John Caulfield readily acknowledges that his players need to be wary. “Galway had a slow start to the year and lost a couple of games,” he says, “but they are on an unbeaten run of several games at the moment. Obviously, they have beaten Dundalk and drawn with Derry in their last two at home, so they are on a decent run and they have some seriously good players. They have goals in their team and they always create a lot of chances, so we are well aware of what is in front of us.”

The home side’s hopes of scoring won’t be helped by the absence of Vinny Faherty who is sidelined for another couple of weeks with an ankle injury while the league leaders will gave late fitness tests to Steven Beattie, Alan Bennett and Karl Sheppard.

Dundalk, meanwhile, are boosted ahead of Sligo’s visit to Oriel Park by the return from injury of both Robbie Benson and Sean Gannon although it remains to be seen whether Stephen Kenny feels he could risk starting either of them after several weeks on the sidelines. Brian Gartland and Stephen Kinsella miss out due to injury as does Rovers’ Daniel Kearns.

Shamrock Rovers will look to build on their impressive defeat of the champions last week against their old cross city rivals Bohemians. Darren Meenan is suspended after a sending off his manager Stephen Bradley rather charitably describes as “harsh” while Paul Corry and Ryan Connolly are both injured.

Gavin Brennan is also suspended as Drogheda United look to get what would be a big win at bottom of the table St Patrick’s Athletic while Ollie Horgan will be in the stands too as Finn Harps face Bray Wanderers.

Horgan has doubts about Paddy McCourt and Harry Doherty but his injury problems are easing slightly after a particularly difficult few weeks. Harps have started to concede at an alarming rate recently, though, and have not scored in their last three games. Bray, who are without the suspended Jason Marks, are a point clear of Dundalk in second place but have taken just one point from their most recent two games.