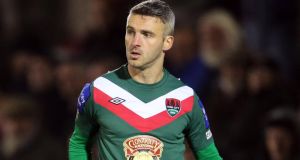 
Cork City have announced the sudden departure from the club of Danny Murphy, the London-born full back who helped the southerners to the title back in 2005. The 31-year-old has departed for “personal reasons” and is considered unlikely to be in a position to sign for any other club in the foreseeable future, and so may have played his last league game.

The defender played more than 200 times for City over three different spells with the club and was, over several seasons, arguably the best left back in the country.

His departure will be a blow to manager John Caulfield who would have valued his experience as he looks to build a team capable of challenging around the top end of the table; City travel to Derry on Sunday.

Before that, last season’s main title contenders are all in action tonight, with champions St Patrick’s Athletic and Dundalk looking for their first wins of the new campaign and Sligo aiming to maintain a strong recent record in Bray.

Unexpected
For the moment, though, the top of the table has an unexpected look about it, with Drogheda leading Bohemians, who they play tonight, on the basis of goals scored last week and so Dalymount hosts its first top-of-the-table clash for a while.

Owen Heary is missing a number of players, including Anto Murphy (hamstring), while Dave Mulcahy faces a late test on a knee problem and Gavin Brennan and Philly Hughes are both suspended for the visitors.

Monday’s extended League Cup encounter with Crumlin United won’t have helped Robbie Horgan’s side’s cause but there is some good news with Stephen Maher joining the club and available immediately.

Those neutrals in search of goals could do worse than to take a punt on wandering along to Oriel Park for the visit of Limerick. The four games between these two sides last season produced 20 and Dundalk’s only win came in the FAI Cup tie, which ended 5-3.

Stephen Kenny will presumably be targeting more than one point from nine this time around.

Keith Ward is still injured for the home side, while Simon Kelly is suspended. For the visitors, Shane Duggan misses out after being sent off last weekend and Robbie Williams is a major doubt.

Sligo are likely to find room in their starting line up for Danny North after he scored twice in midweek and Ian Baraclough also has Kieran Djilali and Ross Gaynor available.

Wanderers are without Danny O’Connor, Shane O’Connor and David Cassidy.

The champions take on UCD without Killian Brennan or Seán Hoare, both injured, but Aaron Callaghan, who must watch from the stand due to suspension, may still find his side’s task daunting enough if last week’s home defeat by Bohemians is anything to go by.

Finally Shamrock Rovers head to Athlone looking to improve significantly on last week’s performance but Mick Cooke will have been encouraged by his own side’s display in Sligo even if they did let a lead slip in the second half.

Doubt
Rovers are with David O’Connor (ankle ligament) and Marty Waters is a doubt but the hosts have a full squad as they look for their first top flight win over the Dubliners since the 1995/96 season when Tommy Gaynor and Warren Parkes scored.