Jack Grealish indicates availability for Republic of Ireland next season

John O’Shea says he feels ‘very privileged’ to be named senior player of the Year at FAI International awards. 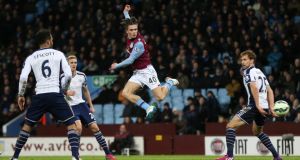 Aston Villa’s Jack Grealish: was named under-21 player of the year at the 3-sponsored FAI International awards. Photograph: Reuters

Jack Grealish has signalled his intention to make himself available for the Republic of Ireland at the start of next season. Asked about his position as he was named under-21 player of the year at the 3-sponsored FAI International awards on Sunday night, the 19-year-old said he had spoken to Noel King.

“It’s always a joy to come over and put the green jersey on,” he said. “I spoke to Noel at the start of the year and I said this year I’m going to take a year out to concentrate on my club football. I’ve signed anew five-year contract and had a good year so hopefully next year I’ll be back inthe green jersey”

There has been considerable speculation the midfielder might declare for England since he made himself unavailable to King but Grealish said he had simply wanted a year to concentrate on progressing his club career.

John O’Shea said he felt “very privileged” to be named senior player of the Year. Remarkably, it was the first award at the event O’Shea had ever received despite having received his first cap, at under-15 level, some 18 years ago. “That’s the best one to get, the senior award,” he said with a laugh when his record was mentioned to him. “The players, the history, the players that have won it; I’m very, very privileged.

“It’s a very proud moment, especially for my family,” he continued. “My mam and dad, all the effort they put into me growing up, taking me to games, to get an award like that is special, from all the way up from Ferrybank and getting across to England.” [CROSSHEAD]Young player award [/CROSSHEAD]Jeff Hendrick received the young player award while Aiden McGeady’s second strike against Georgia won the goal of the year.

Martin O’Neill, meanwhile, has named 29 players, down from 35, in his revised squad for Sunday’s game against Poland with David McGoldrick, Jeff Hendrick, Anthony Pilkington, Rob Elliot, Paul Green and Simon Cox all missing out from the original group.

Aiden McGeady failed to make even the bench for Everton against Queen’s Park Rangers on Saturday but the manager said he hadn’t given up hope at all on the midfielder being available for Sunday although, he suggested, he would know more over the next day or two.

While McGeady’s fitness is clearly a concern, there was some good news over the weekend in terms of the performances turned in by various players and with his side needing to beat the Poles, O’Neill is likely to have been encouraged by the fact five squad members Shane Long, Robbie Keane, Harry Arter, Séamus Coleman and Wes Hoolahan all scored for their clubs.

While McGoldrick, Hendrick aand Pilkington have all failed to recover from injuries in time to join the squad, Robbie Brady’s appearance 10 minutes from time for Hull City all but confirmed his availability to travel. Stoke City boss Mark Hughes had confirmed on Saturday that Jon Walters would be allowed to travel despite the player having had to wear a face mask to protect the fractured cheekbone on which he had surgery earlier in the week when he came on against Crystal Palace.