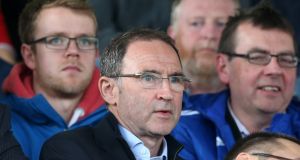 League champions Dundalk appear to be edging towards a move away from the club’s home at Oriel Park, with the FAI confirming that it has lobbied Louth County Council to support the construction of a new stadium by the club.

Dundalk’s general manager Martin Connolly could not be contacted for a comment on Friday night night, but former chairman Ciarán Bond confirmed the club had been “looking at a number of options”, although he suggested no final decision had been made on whether to relocate.

While chairman, Bond said the club would have to decide whether it made sense to move at a time when the ground’s artificial pitch was in need of replacement and the rest of the facilities at Oriel had, due to their age, become extremely expensive to maintain.

He said at that time the options being considered by the club included the modernisation or replacement of the main stand at Oriel or a move to a greenfield site.

This appears to have moved up the agenda over the latter part of 2015 with the FAI confirming in one of its entries on the new Standards in Public Office Commission’s lobbying register that its director of club licensing and facility development, Richard Fahey, met Louth County Council’s director of services towards the end of the year to solicit the local authority’s support for building a new stadium.

The association confirms that the possibility of land being acquired for the construction of a new stadium for Drogheda United was also discussed at their meeting. Drogheda’s relocation has been in the pipeline for many years, with the sale of United Park to the neighbouring Lourdes hospital a key part of the plan.

Other instances of lobbying confirmed by the association in its entries on the register include meetings regarding the purchase and redevelopment of Dalymount Park by Dublin City Council.

At the first of these, an FAI delegation that also included Fahey was led by John Delaney. Among the elected representative and public officials to have attended were Ministers Paschal Donohue and Michael Ring, as well as the council’s assistant chief executive Brendan Kenny.

Other meetings mentioned include a number with councillors and council officials from around the country with regard to the funding of regional development officers, as well as one with a senior civil servant to discuss progress with the much delayed construction of a new stadium for Finn Harps.

New man Marshall sees Shamrock Rovers past Waterford 21:39
City Island to return to hurdles and take on Paisley Park in stayers’ 20:50
McIlroy takes his foot off the pedal and will skip the Honda Classic 20:01
GPA asks delegates to vote against hurling black card at congress 18:33
Dan Tuohy explains ‘rotten to the core’ comments 18:08