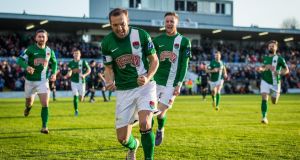 Cork City moved up to third in the SSE Airtricity League Premier Division table as early goals from Steven Beattie and Karl Sheppard gave them victory over Shamrock Rovers at Turner’s Cross.

In the second of three home games in the space of eight days - they host St Patrick’s Athletic on Friday - City began as they had against Finn Harps on Friday, with an early goal. From the kick-off, Greg Bolger found Steven Beattie on the right and he powered inside Luke Byrne before shooting past Barry Murphy at the near post.

It got the home support in fine voice and Rovers laboured in those opening exchanges, not helped by Bryne - making his first league start of the season - having to depart with a knee injury after a 50-50 with Beattie. City were fluent in attack and they were rewarded with a second goal in the 12th minute. Michael McSweeney’s cross from right set up the chance, with the defence unable to clear, allowing Karl Sheppard to arrow a low shot home.

Sheppard might have had another straight after that when he challenged Murphy from a corner but Patrick Cregg was on the line to to prevent a third goal - though there were home protests for handball.

Beattie went close again, shooting low across goal, while Gearóid Morrissey was also denied by Cregg on the line in injury time. City were full value for the half-time lead and, while Rovers were improved on the resumption, they still struggled to get an attacking foothold. Barring a half-chance for debutant Trevor Clarke, they failed to suggest that they would get back into the game.

Sheppard might have got a third for City, variously denied by a Murphy save and a Maxime Blanchard challenge, but it mattered little as the game was safe well before the conclusion.

Seán Maguire went close near the end, Gavin Brennan clearing off the line, while Beattie had a long-range effort which wasn’t far away. In any case, further goals weren’t needed as solid defending ensured that the clean sheet remained intact.