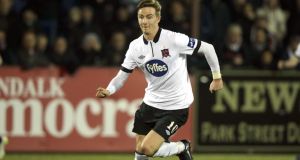 Ronan Finn believes Dundalk have a strong tailwind behind them as they head to Tallaght for the first time this season.

The former Shamrock Rovers midfielder said the champions were confident they could beat anyone after the start they had made to their title defence.

“We’ve no reason not to be confident given our form,” added the midfielder, who has done well for his new club since arriving from the Dubliners during the close season.

“They’ll be difficult to break down but there’s a real feeling amongst the players here that we can get at other teams and score goals; we’ve shown that in the games we’ve played this season.”

Hoops manager Pat Fenlon, who has a surprisingly poor head to head record against Dundalk counterpart Stephen Kenny, will see the game as a significant test of his own side’s title credentials but the hosts will be without Keith Fahey, who is suspended as a result of his sending off in Derry last week.

Bohemians will look to maintain their remarkable early season form against cross-city rivals St Patrick’s Athletic at Dalymount where the home side’s Robbie Creevy will undergo a late fitness test.

Looking to leapfrog Bohemians, if they slip up, are Cork City who will be without Karl Sheppard for the trip to Drogheda due to a calf strain.

Colin Healy and John O’Flynn face late fitness tests but manager John Caulfield is happy about how his side’s challenge is shaping up in the wake of last weekend’s draw in Inchicore.

“When you are keeping clean sheets,” he said, “it gives confidence to the team overall and it also gives you a good chance of winning matches. After eight games, we will have played five away from home, with three of those being against the potential title challengers; I think we have done exceptionally well.”

Elsewhere, Shane Tracy goes straight into Limerick’s squad for the trip to Galway after re-signing for the club.

Sligo have Keith Ward and Danny Ledwith back for the game at Longford while Derry are still missing Stephen Dooley, Joshua Daniels and Shaun Kelly for the visit of a Bray Wanderers side aiming for a third straight win under caretaker manager Maciej Tarnogrodzki.

1 Pete Sampras: The forgotten great with the best serve in the business
2 Tipping Point: DeChambeau’s transformation raises questions, but who will ask them?
3 Super Rugby AU offers glimpse of rugby’s future if law changes are adopted
4 Klopp to rest Lallana to ensure he remains fit for transfer
5 Cam Newton broke the mould: Can his flame be rekindled at the Patriots?
Real news has value SUBSCRIBE