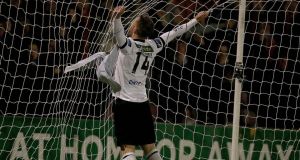 
Keith Long had come away from the narrow win over Bray at the weekend suggesting that while Bohemians weren’t yet taking their chances they would be okay if they kept creating them at the same rate.

This encounter against the champions rather cruelly set him straight on that score.

The home side matched, even edged their opponents for decent spells of an entertaining game, almost half of which they played with 10 men, and certainly had enough chances to take something out of it.

Dundalk, though, are a cut or two above the teams Long’s men had beaten to date and the visitors emerged with a fourth straight clean sheet, all three points and a margin of victory that flattered them a little after twice picking the locals off in the closing stages.

Stephen Kenny might just wonder about just how many chances his side conceded over the 90 minutes but his is now the only side not to have conceded in the league and the goals scored by David McMillan, Jake Kelly and Darren Meenan leave them clear at the top four games into the defence of their title.

The home side might have been considered rank outsiders to take anything from this had it not been for the confidence they carried with them into the encounter from their three previous wins. That showed early on as Long’s side moved the ball well and took the game to opponents who were lucky not to fall behind through the opening exchanges.

Anto Murphy, who scored both of the Bohemians goals in the home win over Galway, should certainly have had one here when Dundalk struggled badly to clear a Lorcan Fitzgerald corner. But the centre back hit the crossbar with his first close range effort then, when he got a second bite at the cherry, missed the target entirely.

There were a couple of penalty appeals for handball too by which time the visitors must have been thinking that things were going to be tougher than originally anticipated.

They needn’t have worried for Bohemians were about to make life a little less challenging for the visitors again.

The start of the home side’s misfortune came after 29 minutes when they struggled to clear a set piece. This time the ball bobbled about high in the box for a bit with McMillan always threatening to turn it goalwards and when Daryl Horgan chipped it back towards the striker, he did just that although it looked as though a defender may actually have been the last one to get a touch.

In the period that followed, Dundalk started to tighten their grip on things and the home side’s fate looked to have been sealed early in the second half when Murphy was sent off after getting a second yellow.

Long’s side battled on and enjoyed the better of the next 20 minutes or so with Gary Rogers forced to make three good saves, the best of them from Adam Evans who came within a whisker of turning home a cross from Derek Pender.

The window of opportunity passed, though, and as the locals ran out of steam, Dundalk struck on the break with Kurtis Byrne setting up Kelly for a tap in before Meenan added a third three minutes from time.