Bohemians the happier as derby fails to ignite 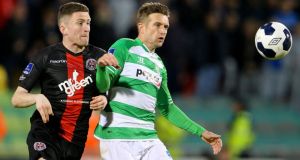 Shamrock Rovers 0 Bohemians 0
Having asked questions of Shamrock Rovers’ title aspirations to frustrate their arch-rivals in a derby that rarely sparked to life, it was Bohemians who left Tallaght Stadium the happier.

Having bemoaned the fact his side were creating plenty of chances in recent games but not converting them, Bohemians’ manager Owen Heary had to endure a little more of the same.

Rovers, though, and Ciarán Kilduff in particular, will rue the best of the wasted opportunities as they didn’t have enough about them to earn the three points.

Despite hoping that a broken nose sustained last week against Athlone wouldn’t keep him out of the game, Rovers’ Jason McGuinness didn’t feature. David O’Connor thus returned to league action for the first time since the opening match of the season to form a new central defensive partnership with Rob Cornwall.

With President Michael D Higgins once again an interested spectator at a domestic game, there was initial derby intensity when Rovers’ left-back Luke Byrne was booked for a clattering challenge on Craig Walsh.

Rovers passed it well in the opening exchanges with Bohemians keeper Dean Delany worked by Kilduff on 12 minutes. Gary McCabe whipped over a cross from the left which the striker controlled before spinning his marker and forcing a save from Delaney with his feet.

First opening
Their passing a little less precise, Bohemians were slow to get into the game, though a misjudgment by Cornwall gifted them their first opening on 25 minutes.

Walsh knocked the ball past the hesitant Rovers defender to run by him and cross low for the in-rushing Karl Moore at the far post. The finish was weak as the winger shot into the side netting when he should have done better.

Shortly after Rovers had a shout for a handball against Derek Pender ignored, Bohemians again found themselves in behind the home defence, this time following a mistake by David O’Connor.

But Steven Beattie failed to capitalise, slicing flagrantly wide with the centrally positioned Jason Byrne screaming for the pass.

In perhaps the move of the first half on 39 minutes, Kilduff and Stephen McPhail combined to set up McCabe, whose shot had the power but was directed well wide.

Stoppage time
Rovers then had Barry Murphy to thank in first-half stoppage time as their keeper made a terrific double save, first from Byrne and then Moore, from Walsh’s low cross from the right.

The visitors wasted another opening within three minutes of the restart, Byrne this time slicing wide after Walsh and Moore had carved a good opening. That was about as good as it would get for Bohemians as Rovers injected plenty of urgency to their game to dominate much of the remainder of the match.

O’Connor poked over the crossbar from a McCabe corner with a Shane Robinson shot – on his 450th appearance – raising appeals for a handball in a crowded box. Ronan Finn then surged in from the left to unleash a shot from some 30 yards that wasn’t far wide.

Kilduff would then fluff Rovers best chance of the night on 84 minutes. Substitute Seán O’Connor and Finn worked the ball to put Kilduff in on goal but, as in the first half, his drilled shot was cleared away by the feet of Delany.