Wilson, Quinn and Murphy out of World Cup qualifiers 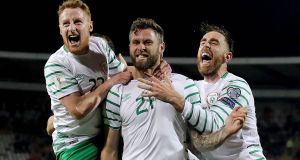 Stephen Quinn (left) and Daryl Murphy (centre) have been ruled out of this week’s World Cup qualifiers. Photo: Ryan Byrne/Inpho

Marc Wilson, Stephen Quinn and Daryl Murphy are among the players ruled out of the Republic of Ireland squad for the World Cup qualifiers against Georgia and Moldova through injury with Keiren Westwood, Aiden McGeady and Harry Arter currently having problems of their own assessed at their clubs.

Westwood looks almost certain to be withdrawn and Martin O’Neill has already taken the precaution of calling Manchester City’s Ian Lawlor into the squad as cover with uncapped Danny Rogers the only other goalkeeper after first choice Darren Randolph. Adam Rooney has also been added to the group but Barnsley’s Conor Hourihane has already been cut on this occasion.

While not too many of the players suffering from injuries would have been regarded as likely starters, O’Neill will be concerned to have so many concerns ahead of two games that the team will be anxious to take six points from.

James McCarthy has travelled and is being assessed by the FAI’s medical staff but the Everton midfielder seems highly unlikely to feature in either of the games given that he had not even resumed full training with his club since having surgery on his groin almost a month ago.

Stephen Gleeson and Jonny Hayes will stay on with the squad, which numbered 24 as the first training session of the week got under way out at Abbotstown but Eunan O’Kane is also a concern and it is far from clear whether he is fit enough to be kept around for the week.

Quinn had gone even before the session got underway with the Reading midfielder returning to the club after a knee injury had been assessed. Kevin Doyle did not travel from the United States due to an ankle injury that has sidelined him for the past week and Anthony Pilkington is ruled out by a quad muscle strain.

McGeady (hamstring) and Arter (groin) are, like Westwood, still in England although it is less certain that they will be staying there. Murphy, meanwhile, had travelled but he too has returned to his club after the calf injury that has kept him on the sidelines at Newcastle recently was effectively reckoned to rule him out of Thursday’s game.