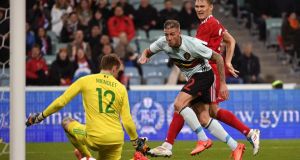 France twice fell foul of decisions made by a video assistant referee (VAR) in a high-profile example of the new technology during their 2-0 home defeat against Spain.

Antoine Griezmann thought he had headed France into the lead three minutes after half-time but, after the referee Felix Zwayer consulted the extra official, the goal was quickly ruled out for offside against Layvin Kurzawa.

VARs are being trialled by Fifa at certain events with a view to wider roll-out; there was no need for recourse to the system when David Silva scored Spain’s opener from the penalty spot in the 68th minute but it came in useful again when Gerard Deulofeu, initially flagged offside, was ruled to have scored their second after a short delay.

Clarence Seedorf made a long overdue farewell to the international scene before Holland’s 2-1 defeat against Italy. The 40-year-old played his last match for the national team in 2008 but no occasion had ever been found to mark the contribution of a player who won 87 caps. Fabio Capello and Louis van Gaal were among those in Amsterdam for the farewell speeches as Seedorf was made a “knight of the federation” by the Dutch FA, the KNVB, before kick-off. When the action began, an early own goal by Italy’s Alessio Romagnoli continued the party but Éder equalised from 20 yards within a minute and Leonardo Bonucci scored the visitors’ winner just after the half-hour.

Cristiano Ronaldo paraded the Euro 2016 trophy before Portugal’s 3-2 defeat against Sweden in his home town of Funchal. He made the local fans happy by scoring the opening goal 18 minutes in and, when Andreas Granqvist put through his own net, a win seemed likely. But two strikes by Viktor Claessen and a last-gasp own goal by João Cancelo gave the away side a comeback win.

The Crystal Palace striker Christian Benteke scored twice in Belgium’s 3-3 draw with Russia in Sochi. Benteke’s two headers, both scored in the three minutes before half-time, came after Viktor Vasin and Kevin Mirallas traded goals and gave the visitors a 3-1 lead. But Aleksey Miranchuk gave Russia hope and then, in added time, Aleksandr Bukharov pulled them level.