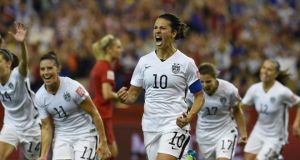 Carli Lloyd’s penalty set the USA on their way to a 2-0 win over Germany in their Women’s World Cup semi-final. Photograph: Epa

The United States reached the Women’s World Cup final with a 2-0 victory over fellow international powerhouse Germany in Montreal.

A penalty in the 68th minute, controversially awarded but confidently converted by Carli Lloyd, broke the deadlock after Germany’s Celia Sasic had missed a penalty of her own.

Substitute Kelley O’Hara then stabbed in the second goal to ensure Jill Ellis’ side will face England or Japan in Sunday’s final.

Melanie Leupolz headed over from an early German corner and Alexandra Popp’s mishit cross was pushed over by Hope Solo, while Nadine Angerer saved Julie Johnston’s header at the other end.

Popp and Morgan Brian both required lengthy treatment after a clash of heads as the American bravely cleared a free-kick. Germany’s Leonie Maier then became the first player booked, after fouling Megan Rapinoe.

Meghan Klingenberg’s shot was headed away by defender Saskia Bartusiak, hopelessly wrong-footing Angerer but looping well wide. That led to three successive corners, with Morgan and Heath denied in the six-yard box from the second.

Heath was shaken after colliding with the advertising boards, while Popp somehow escaped a booking after flattening Rapinoe.

Popp re-emerged with her head extravagantly bandaged and her rugged and direct style earned Germany a penalty on the hour — Johnston booked for what would be termed a ‘horse-collar’ challenge in the NFL parlance of her boyfriend, Philadelphia Eagles tight end Zach Ertz.

Sasic had scored two spot-kicks in the tournament, including in the shoot-out against France in the quarter-final, but she side-footed this one wide as Solo dived the wrong way.

The USA were given their own opportunity from the spot eight minutes later, though Annike Krahn’s foul on Morgan was outside the area. That did not bother Lloyd as she stepped up to find the top corner for her third goal in successive games.

And the States made victory safe with six minutes to go when Lloyd jinked through and fired the ball across goal and O’Hara, on for Heath in the 75th minute, flew in to score her first international goal.

England an Japan meet in Edmonton on Wednesday, with the winners facing America in Sunday’s Vancouver showpiece.