United Spain want to put World Cup nightmare behind them 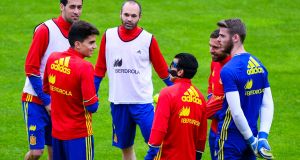 These have been nervous days, Vicente del Bosque admitted, but then again they always are.

This was not about David de Gea, although the Spain manager said that a decision on who starts in goal against the Czech Republic on Monday had not been taken, a judgment yet to be made regarding whether the past two days have affected the man at last set to become their No1. Nor, he said, was it about their preparation, although he said it had been unusual. This, he insisted, is just the way it is, a condition of competition. “Twenty-four hours before, or 48 or 72, you get a little edgy,” Del Bosque said. “I get nervous, even if it doesn’t look like it.”

He was right: it did not. For all the problems Del Bosque has faced, there was barely a twitch of the moustache. It was that time again, one he and his players have come to know well. It has tended to go well, too: 2014 was disastrous, it is true, Spain falling at the Maracan?, that graveyard of great expectations, but the Uefa official who introduced them to the audience at the Stadium de Toulouse, announced: “It is a great honour; we have the title holder here ... which, as you all know, is Spain.”

They knew but it was perhaps worth a reminder. Failure in Brazil hangs heavy, a memory that feels more present than Kiev, Johannesburg or Vienna. There is not that sense of certainty there once was although Del Bosque, asked what gave him confidence, said: “Ability and experience.” There is plenty of that. No squad has as many caps - just short of a thousand - and four of their likely starters began the 2008 final. Few have such talent and no other can become triple European champions.

Spain will have to overcome difficulties if they are to do so, though. Success feels a little distant and the problems are there, the latest of them unexpected and its impact huge. When De Gea was named in connection to a sexual assault case on Friday he was in his hotel room playing on a games console. “I am a calm person,” he said, but the activity was suddenly frenetic at Spain’s previously tranquil training camp, uncertainty unleashed.

Some reports jumped the gun and said he was coming home. That was never a possibility but there were conversations with family, lawyers, representatives and the federation. Eventually it was decided that De Gea would give a brief press conference. Sergio Ramos offered to join him, as did Gerard Pique. He went alone but Pique and Jordi Alba stood with staff in a doorway stage left, a show of support.

“It was not nice news and when something affects a team-mate he always has the support of the group,” Ramos said, but the defender stopped short of suggesting this might actually make Spain stronger the way that controversy preceded two Italian World Cups, say. “Maybe when there’s a problem the group has to be stronger but I’m largely indifferent,” he said.

“It’s all lies, false,” De Gea had said of the allegations. “And that’s it,” he had added. And that is it: left behind, not to be talked about any more, the focus on football. Which is not to say the subject would not be raised but it would be quickly pushed aside. “David has spoken, so we’re not going to comment,” Ramos said.

The doubt in everyone’s minds remained, though: how would this affect the goalkeeper? Del Bosque said it was something he must evaluate. “If we see that it affects him, we will act; if not, we will do what we were going to do, no problem,” he said.

What he was going to do was already up for debate, going back years now, although his answer appeared to confirm what had become assumed: that De Gea would at last start in preference to Iker Casillas, the country’s No1 since 2000. Now that debate returns.

De Gea has always been cold, startlingly so, seemingly unaffected on the pitch by all that goes on around it. And there has been little outward sign of the impact this might have on him, or on his team-mates. But Del Bosque must make that call. Asked when he would tell his goalkeepers, he replied: “At the same time as everyone else.” Should they be told sooner? Could the uncertainty affect them? “They’re not kids; they’ve passed puberty,” he said with a smile. The decision will be communicated on Monday; true or not, Del Bosque said it would be made on Monday, too.

It is not the only decision on which they wait. Spain’s manager resisted the temptation to offer facile promises about how this is different from Brazil - he claimed to have had no inkling that things would go so badly wrong back then - and said there has been much thinking to do, talking about “turning things over a thousand times”. As others debated the goalkeepers, he has long stressed there are other doubts in constructing a team for France 2016.

Doing so has been made harder by what he described as a “singular” buildup. It was a word he returned to often here and has repeated over the past fortnight, a hint that even while he says preparation has been “ideal”, considering the circumstances, he is not satisfied. Nor were some critics: the final squad drew sufficient criticism that even Del Bosque appeared irritable at the attacks. Worse came when Spain lost their final warm-up game to Georgia - the worst team, by Fifa ranking, to have beaten them.

The “singularity” resides in the fact that Spain’s players arrived at the national team in three stages - first nine, then nine more, then four. And, yes, that does make only 22. The first arrivals were joined by a pool of young “promises” from which Hector Bellerin made the leap to the senior squad after Dani Carvajal’s injury in the Champions League final. Happily Del Bosque has been impressed with him, as he has with Nolito: skilful, quick, goals, a touch of flair. Something a little different. “Rock and roll amid the violinists,” as the former Spain striker Kiko Narvaez put it. Nolito may start against the Czech Republic, a reflection of how Del Bosque’s ideas have shifted and taken shape.

Other examples include contemplating two deep midfielders only to decide that is a useful alternative rather than a starting point, hence Bruno Soriano’s arrival; the desire to take players who can shake a game up, running beyond people, hence Lucas Vazquez; the willingness to reach the area in three passes rather than 33; the faith in those whose reliability with their country defies club seasons, hence Pedro and Cesc Fabregas; even the revival of the false No9 idea, even if he appears set on Alvaro Morata; and the arrival of an old-fashioned No9, peerless in the air, like Aritz Aduriz.

“Will the uncertainty over the starting XI create uncertainty?” Del Bosque answered with a smile: “We’ll see tomorrow.” But the uncertainty is not so great, at least in terms of personnel. There are three main doubts, three players to be added to the eight that appear certain to start: Juanfran, Pique, Ramos, Alba, Sergio Busquets, Andres Iniesta, Morata and David Silva. Nolito or Pedro will be one, in the front three. The third midfielder is another, likely to be Fabregas. And there’s the goalkeeper, a two-year-old debate revived. De Gea is expected to start, though, two years after Del Bosque announced a “soft transition” in goal. Yet the potential XI underlines that some things are constant; there are certainties still, from Ramos and Pique to Busquets and Silva, from Iniesta to the idea.

“If you look at some of my notes from a while back, some things are different,” Del Bosque said. “But what we have here is more or less consistent with what we’ve thought for three or four months. We have to analyse the personal situations of each player after a very demanding season and it’s hard to know exactly [HOW THEY ARE], but I think we’re in good condition, despite the singularity of our preparation. It’s been correct, very correct. We’ve trained well, the atmosphere has been good.

“I’m relaxed, but with that uncertainty you always have in a competition. We have the same responsibility and pressure as ever, or maybe more, but of the 24 teams only one can win. We’re ready to start.”