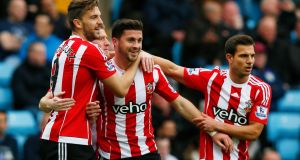 Stoke City will be clearer over the coming days if Shay Given will be fit for next weekend’s Premier League game against Sunderland or, if he misses that, whether the 40-year-old might feature again before the end of the season.

The Irish man was replaced at half-time in Saturday’s 4-0 defeat by Manchester City – they trailed 2-0 at the time – with a groin strain. While the problem is not thought to be serious, it remains to be seen whether he will be available again for any of Stoke’s remaining games or, for that matter, whether Mark Hughes would chance starting Given even if he is declared fit again.

“He felt his groin about 20 minutes in,” said the Stoke boss after the game. “He felt he could get to half-time but couldn’t continue after that.”

The problem comes as Given was desperately trying to make the sort of impact that might catch the eye of Republic of Ireland manager Martin O’Neill some seven weeks before the European Championships.

As it turned out, his return, after a long lay-off with a knee problem sustained while playing for Ireland last October, involved 135 of minutes of football and six goals conceded. None of the goals were particularly down to him with Stoke simply well beaten in both games, but Given would have been hoping to play more and will be anxious to play again before the end of the club season.

Keiren Westwood kept a clean sheet for Sheffield Wednesday against MK Dons over the weekend, while David Forde and on-loan Manchester City youngster Ian Lawlor from Dublin were the unused substitute goalkeepers as Millwall won 3-1 at Bury in League One.

Apart from the goalkeeping situation, Irish defenders were pretty thin on the ground in the Premier League over the weekend. John O’Shea was an unused substitute for Sunderland as they drew 0-0 with Arsenal yesterday, and Ciaran Clark was absent through injury as Aston Villa lost 2-4 at home to Southampton.

Seamus Coleman also missed Everton’s FA Cup semi-final defeat although it is hoped that he, Jon Walters and Marc Wilson might all be in contention to feature for their clubs next weekend.

Shane Long’s goal in the Southampton win makes this season the highest scoring of his Premier League career with nine. The striker, who also laid on one of Dusan Tadic’s two goals on Saturday, has another three for his club in other competitions as well as three for Ireland since last summer.

Manager Ronald Koeman said afterwards that Long had apologised for not scoring more than one on Saturday.

The Irish man acknowledged he might have had one or two more, telling the club’s official website: “It was a good performance. We could have scored a lot more and me personally I had a few chances which hit the post and the crossbar which is a shame, but we’re happy with the performance.”

Kevin Doyle scored in the MLS as he returned to competitive action for the first time since injuring himself against Switzerland a few weeks ago. He came on for Colorado Rapids with 12 minutes of their game against Seattle Sounders remaining and made it 3-1 for the home side.