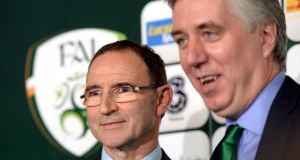 The FAI has reached a four year agreement for exclusive live rights in the Republic of Ireland for home friendly matches over the next four years, starting with next Wednesday’s clash against Oman.

It will be followed by the USA match in November and the historic home game against England in June. Setanta will also show 16 live senior women and Under-21 matches over the next four years and will become sponsor of the FAI’s Emerging Talent Programme.

Welcoming the news, FAI CEO John Delaney said: “This is a wide ranging agreement that demonstrates a real commitment from Setanta Sports to Irish football.

“Covering all home friendly matches, U21 and senior women’s games and support for the FAI Emerging Talent programme alongside existing commitments to the SSE Airtricity League, Setanta Sports will provide an excellent platform for the promotion of the game.”

Brian Quinn, Marketing Operations Director with Setanta Sports admitted: “We are delighted with this four year deal that re-affirms our commitment to Irish football from grassroots right up to the senior team.

“We look forward to working with the FAI and helping them further develop football in Ireland. The addition of these live games will sit nicely alongside our live Premier League coverage on our BT Sport and Setanta Sports channels.”

Setanta Sports has broadcast Ireland friendlies before but this is the first long term deal for Setanta to show home friendlies. Setanta Ireland also broadcasts SSE Airtricity League of Ireland and is the sponsor and broadcaster of the Setanta Sports Cup.

1 Ken Early: Why international football is fading into obscurity
2 ‘A radical departure’: Who are CVC and what are their plans for rugby?
3 Connell losing touch with club championship is real tragedy of Normal People
4 Colin Kaepernick’s exile is too fresh for NFL to speak out on US protests
5 Michael Jordan speaks out against George Floyd killing in rare statement
Real news has value SUBSCRIBE
Crossword Get access to over 6,000 interactive crosswords