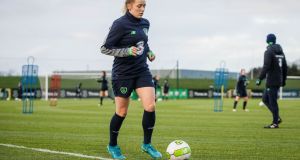 Harriet Scott is included by Colin Bell in the Ireland squad for the World Cup qualifiers against Norway on June 8th and 12th although the manager says that, as with Niamh Fahey, there is still some concern over the left back’s fitness as the two games approach.

Scott missed the games against Slovakia and the Netherlands in April which yielded three points and her recovery from a broken collarbone has been held up a bit after she was again injured while working towards full fitness. The hope is that both she and Fahey will be fit for the games.

Rianna Jarrett returns to the panel for the first time in more than two years, meanwhile, with the Wexford striker having overcome a third cruciate ligament injury.

Megan Campbell, Stephanie Roche and Roma McLaughlin miss out through injury while Heather Payne is one of three players unavailable due to the Leaving Cert.