Manager, who told the winger to get fully fit, says players must take responsibility 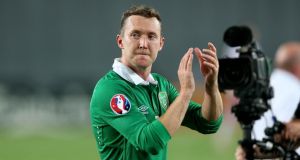 Aiden McGeady is probably at least as pressing a concern for the manager, who seems unsure as to whether he will have the Everton midfielder fully fit and available to him for next month’s European Championship qualifiers because of an ongoing hamstring problem.

O’Neill seemed a little bit exasperated yesterday that the 29-year-old has been suffering with the problem for the best part of a year, something he says he did not fully appreciate until he was forced to pull out of the qualifier against Scotland at the start of the summer.

The manager said he spoke to the winger, whose career he helped develop during their time together at Celtic, and told him to get himself fully fit. “You would think that as a professional player, a professional athlete, (that he would be aware that should be the priority).

“I’m not so sure any of us had been totally aware that this tightening of his hamstring had been going on for a year or something like that. I found that pretty strange I must admit so on the strength of that there, I gave him some pieces of advice: ‘go get fit, properly fit’. I think he was taking it on board.

“Aiden is no longer 22, 23, 24 ... you don’t want to get to the end of your career and find you had an incredible amount of talent, talent that most people would die for, and you haven’t utilised it properly.”

McGeady missed Everton’s opening game of the season after which manager Roberto Martinez suggested that the player would be involved for the second, against Southampton. However, he wasn’t involved and while is said to be training with the squad this week, it is unclear the extent to which the hamstring problem might disrupt his season again this year.

Asked if he felt McGeady had hidden the extent of the injury from his at times last season, O’Neill said he didn’t know, but oddly the player himself said at the start of the summer that he was surprised to have been selected for the game against Poland given the extent to which it was troubling him.

On that occasion, McGeady received an injection to help him get through the game, something he subsequently admitted his club had not been happy about.

“As a club manager I would hate any international manager interfering and saying ‘nobody is looking after this player’. You [the player] have got to take responsibility yourself. You’ve got to look after yourself.

“What I was surprised about was that Aiden played the game against England and trained during the course of the week; then on the Thursday before our Saturday game [against Scotland] he really felt it.”

“So that’s something he has to look after and monitor himself. That’s a long time to be carrying that kind of problem around.”

McGeady, of course, is far from the only player sidelined during the opening weeks of the British season. Of 26 players based in England and Scotland involved with O’Neill’s last squad in June, only 13 started for their clubs over the first weekend of the new campaign, something that, O’Neill says, didn’t really surprise him.

Shay Given is back on the bench now that he has joined Stoke, David Forde has dropped to League One with Millwall and Keiren Westwood was injured while playing for Sheffield Wednesday at the weekend. Darren Randolph, meanwhile, is expected to get a couple of first team games at West Ham before the internationals due to Adrián’s suspension, all of which leaves O’Neill with a significant call to make.

Similarly, there are problems with the defence as John O’Shea and Marc Wilson have yet to feature for their clubs and Stephen Ward is still out of favour at Burnley, prompting Martin O’Neill to call up Greg Cunningham, now with Preston North End, for the first time since he became manager.