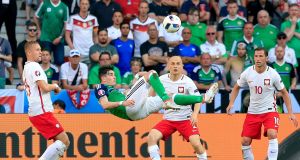 Michael O’Neill stood rigid in his technical area. The final whistle had just blown and the Northern Ireland manager was taking in the enormity of a 1-0 defeat.

O’Neill has worked a minor miracle to get this Irish team to their first-ever European Championships and part of the reaction to this loss – narrow in scoreline but wide in margin – should include an understanding of that achievement.

It was 30 years to the day since Northern Ireland last played in a finals, the 1986 World Cup. That day saw Pat Jennings and co beaten 3-0 by Brazil in Mexico and while Poland are no Brazil – as the song goes – the gulf in class was visible.

O’Neill sent out a defensive team in which the two wing backs play in League One, Conor McLaughlin and Shane Ferguson. They performed manfully but in Robert Lewandowski and Grzegorz Krychowiak Poland have important figures from Bayern Munich and Sevilla and there were periods when it felt like a mismatch.

However, due to O’Neill’s organisational skills and Poland’s waywardness, there was parity until the 51st minute when Ajax’s Arkadiusz Milik drilled a low shot shot beyond Michael McGovern.

Poland had failed to enforce their superiority before that, and now they did so again. O’Neill made changes and Conor Washington went up front to help the isolated Kyle Lafferty. Washington fashioned a half-chance for himself but in truth that was all Northern Ireland could really cling to.

Now they go to Lyon to face Ukraine on Thursday and O’Neill will have to lift players who looked drained by the opposition, the occasion and the heat of the south of France.

In that sense it remains an adventure but, like the Irish first half, it could be described as daunting.

At its end there was an avalanche of statistics to prove Poland’s domination – almost 70 per cent possession, seven corners to zero, four decent chances and an only-matter-of-time atmosphere inside the Nice stadium.

Northern Ireland were struggling to get out of their own half. While Jonny Evans, Gareth McAuley and Chris Baird made block after tackle after clearing header, there was next to nothing in the way of an attacking presence.

And yet. And yet the score was 0-0 and McGovern had made just two significant saves.

It was half an hour before the Hamilton Academical goalkeeper had anything serious to do – saving a shot from Milik – and six minutes before half-time McGovern tipped over a volley from the lively Bartosz Kaputska.

There had been other worrying moments for the men in green. As early as the fifth minute – with Northern Ireland looking panicked by the stage they were on, and by Poland’s powerful start – Milik could not control a spinning ball; four minutes later Milik stabbed a shot wide.

Jakub Blaszczykowski, on loan at Fiorentina from Borussia Dortmund, was prominent down the Polish right, where he was faced with Ferguson of Millwall.

But for all this, Poland found themselves level at the interval and were entitled to feel bemused. For the ninth game in a row, O’Neill’s organised charges had reached half-time without conceding.

But there were worried looks around the stadium where Northern Ireland fans had made a ‘Sea of Green’. And a racket.

In an effort to quell Krychowiak, O’Neill had positionally swapped Steven Davis with Paddy McNair as quickly as the 17th minute. The manager hoped McNair could impose himself.

But McNair rarely saw the ball and was replaced by Leeds’ Stuart Dallas for the second half. Unfortunately it was only six minutes old when Blaszczykowski made another foray along the Irish left.

Poland’s final pass had been suspect until that point but Blaszczykowski fed a daisy-cutter into the feet of Milik. On the edge of box, Milik had time to strike a low shot to McGovern’s left and in.

It sounds harsh but the contest felt over there and then.

But 1-0 always left the possibility of an equaliser. O’Neill is a pragmatic man and knows dead-ball situations are a way of levelling a difference in class. Near the end Davis almost seized on a well-worked routine from Oliver Norwood.

But the inspirational Irish captain could not get a touch no matter how he stretched. It was that kind of day for the Irish. A stretch too far.

1 Betting shops face uncertain future as they prepare for Monday reopening
2 Mature Ringrose keeping the ups and downs of rugby life in perspective
3 Tianna Bartoletta: ‘After you’ve gotten your medal, you become black in America again’
4 Sports bodies must keep electronic records of participants as training sessions resume
5 Timo Werner giving up on Liverpool dream on path to being truly wanted
Real news has value SUBSCRIBE
Crossword Get access to over 6,000 interactive crosswords