Germany taken to the limit by Algeria 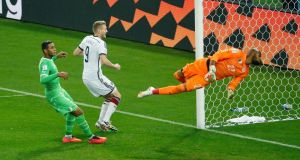 Germany got there in the end. It had not been pretty for much of the first half and it was a war of attrition in the second, but the three-times world champions won through after the extra half-hour.

The breakthrough came from Thomas Müller’s deflected cross, the substitute Andre Schürrle showing impeccable timing to flick home with the inside of his trailing foot. Mesut Özil made the game safe in the last minute and, despite Abdelmoumene Djabou’s late effort, for plucky Algeria, there would be no revenge for the scandal of the 1982 World Cup.

This was arguably Algeria’s biggest ever game, their debut appearance in the knockout phase of a World Cup, and they attacked it with tactical cuteness and an overload of commitment. There was no doubt that they worried Germany, their more illustrious rivals, as they sought to set up an even greater grudge match against France in the quarter-finals. Sixteen of their squad were born in France.

Germany were poor in the first half but slowly they tightened their grip and they might have advanced in regulation time but for the heroics of the Algeria goalkeeper, Rais M’Bolhi. He denied Mario Götze towards the end of the first half and he saved brilliantly from Philipp Lahm and Thomas Müller after the interval. Müller and Bastian Schweinsteiger also spurned further chances, before Germany finally confirmed their superiority.

Algeria wanted to embrace the sense of liberation that had followed their historic qualification from the group phase, for the heat to be on the favourites, Germany, and yet their mission to avenge the injustice of 1982 meant that the pressure stalked them, too.

It had been almost impossible to separate the sense of history from this tie; those grisly memories from Gijón when West Germany and Austria carved up the 1-0 win for the former that secured qualification for both European nations and forced Algeria to the exit. Algeria remain the only country to have been eliminated from a World Cup group with two wins.

The Algeria players from 1982 had called upon the current crop to help them forget. Algeria were flying the flag for the Arab world and, after Nigeria’s loss to France earlier in the day, for Africa, as well. So, no pressure.

It felt as though the onus was on Germany to push on to the front foot, to impose their technical quality and, with Algeria happy to keep bodies behind the ball, to remain compact. The battle lines were drawn. Germany’s back line was extremely high – Joachim Löw could be seen telling his defenders to squeeze up – and Algeria sought to expose them with quick counters and balls into the channels.

Algeria were the better team in the first half as Germany failed to settle, even in conditions that were supposed to favour them. They had struggled in the searing heat of their group phase matches but it was cooler here in Porto Alegre; even a little chilly. The name of this stadium translates as the Riverside and it felt more like an evening in Middlesbrough than one in Brazil.

It was surprising to see how loose Germany were for much of the first half; their game pockmarked by errors. When Benedikt Höwedes was guilty of one, Löw strutted to the edge of his technical area, looking bothered while Germans in the crowd shook their heads and laughed.

Their team had plenty of the ball but only towards the end of the first half did they begin to stretch Algeria and ask questions. M’Bolhi saved low from Toni Kroos in the 41st minute and got up to deny Götze at close quarters on the rebound. The second save was excellent. That apart, Germany were largely restricted to long-range efforts before half-time.

Algeria had pace and trickery in wide areas while in the centre-forward, Islam Slimani, they carried a threat. Germany looked wobbly at the back, with the goalkeeper, Manuel Neuer, sparking alarm with a few bolts from his line. With his defenders so high, he looked like a sweeper at times.

On the first occasion, from the left-back Faouzi Ghoulam’s pass, Slimani got around him only to find the angle to goal against him. Slimani had the ball in the net with a downwards header from Ghoulam’s whipped cross only to be correctly called back for offside while Ghoulam flashed wide from a tight angle and Mehdi Mostefa’s sweetly struck shot deflected wide off Jérôme Boateng.

This German generation is gifted with an abundance of highly skilled midfielders and so the temptation to cram as many of them into the team is understandable. But in doing so, Löw sacrifices pace on the flanks. Germany were patient to the point of being ponderous.

Gradually, though, their possession football pressed Algeria back and did not allow them out. It became a question of whether Germany could fashion the decisive moment and they flickered in the second half.

Löw introduced Schürrle on the right at half-time, which meant Mesut Özil moved over to the left, and the substitute looked lively. His first involvement was a deflected shot that looped up and dropped narrowly wide. Moments later, from Kroos’s cross, Shkodran Mustafi thudded a header straight at M’Bolhi – a good chance wasted – while from Bastian Schweinsteiger’s lay-off, Lahm drew a fingertip save from M’Bolhi.

Slimani burst forward to slam a shot into Neuer but it was Germany that looked the more likely to nick it and when the big chance came, they would have wanted it to fall to Müller. Sami Khedira, on for the injured Mustafi, crossed and Müller seemed to score. His free header, though, was too close to M’Bolhi, whose reflexes were sound. Schürrle’s rebound was blocked by Essaïd Belkalem.

Towards the very end of normal time, Muller jinked inside Belkalem but could not finish while Schweinsteiger fluffed another free header from Lahm’s cross. Algeria hung on for extra time but within two minutes of the resumption Schürrle struck.

1 Seán O’Brien: Anger over my parents’ break-up never left me
2 Robbie Henshaw likely to be the only Irish change for France finale
3 Drogheda United finally on the up and up after dramatic night
4 Cian Healy: ‘Realistically I got away with murder when I was younger’
5 Bartomeu resigns and drops bombshell of Barcelona joining European Super League
Real news has value SUBSCRIBE
Crossword Get access to over 6,000 interactive crosswords