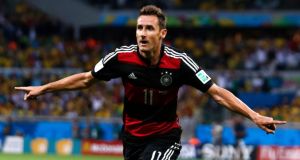 Germany striker Miroslav Klose, who capped a record-breaking career with the national team by winning the World Cup last month, has retired from international football.

Poland-born Klose, who scored twice in the tournament in Brazil to become the competition’s record goal scorer of all time with 16 goals, said the time was right to end a 13-year career with the German national team.

He is the second member of the German team to quit after the tournament following captain Philipp Lahm last month.

“Winning the title in Brazil was a childhood dream come true,” the 36-year-old Lazio striker said in a statement released by the German Football Association.

“I am happy and proud to have contributed to this big success for German football. For me there could be no better moment to complete the national team chapter.”

Germany’s second most-capped player behind Lothar Matthaeus made the first of his 137 international appearances in 2001 and went on to become the top German scorer of all time with 71 international goals. He broke Gerd Müller’s 40-year-old record of 68 goals in June.

Germany’s only out-and-out striker in the World Cup squad, Klose was initially benched in the tournament but earned back his starting spot and scored once against Ghana in the group stage and then again in their 7-1 semi-final demolition of hosts Brazil in the semi-final.

“When I met up with Miro last week he told he me he had thought long about it and talked to his family,” Germany coach Joachim Löw said. “I immediately sensed that his decision was irreversible and that I cannot convince him otherwise.

“You can always count on Miro to keep his word and that was the case in Brazil as well. I have a lot of respect for Miro’s decision as well as for his unbelievable national team career that is all but impossible to trump.

“As player and a human being, we will be missing Miro and I am happy and grateful to have been allowed to work with Miroslav Klose.”

A lethal finisher, Klose was a relatively late starter for Germany after playing no role in any of the country’s national youth squads.

He then went on to play in four World Cups starting in 2002 and also competed in three European championships.

The Republic of Ireland have been drawn with the world champions in the upcoming European Championship qualifiers, with Martin O’Neill’s team travelling to Gelsenkirchen on October 14th, while the home leg takes place in October 2015.